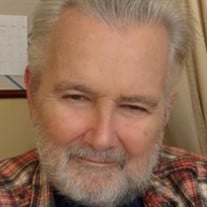 William Charles Jones, 74, died January 17 at Coastal Hospice at the Lake, Salisbury, MD after a decade-long courageous battle with Parkinson’s and Myelodysplastic Syndrome (MDS). Bill, son of Elizabeth Jones and Josiah William Jones, was born in York, PA where his love of music blossomed, and he began studying trumpet. After graduating high school in Gaithersburg MD, he studied at Berkelee School of Music in Boston. Bill played professionally with entertainer Phil Flowers and the Flower Shop, touring the US and Caribbean. His lifelong passion for music led him to perform in classical and jazz concerts in the Washington DC area. Recently he performed with the Salisbury Community Band and UMES Community Jazz Group. He wore many hats in his life. Beginning in 1973, Bill worked as a book buyer/manager in the Washington area through 1985. Afterwards he established William C Jones Contractors, in Silver Springs, MD and Deal Island, MD. At age 57, Bill returned to school, graduating in 2006 from Wor-Wic Community College with a Certified Supervised Counselor-Alcohol and Drug degree. He worked on the Lower Eastern Shore area in multiple treatment centers including Dave Collins and Associates, Warwick Manor Behavioral Health and Hudson Behavioral Health. Bill’s ability to connect and inspire was a true gift. His humorous take on life contributed to his success as a group leader. He lived his life promoting social justice in his work and in his community. He loved gardening, watching movies, and going to the beach. On November 17, 2021, Bill celebrated 17 years of sobriety as a dedicated member of both Alcoholics Anonymous and Narcotics Anonymous. He was a member of the Richard A Henson Family YMCA in Salisbury, as well as the Lower Shore Parkinson’s Group. He is survived by siblings Mike Jones, Julia Evans and Susan Jones, and by stepson James Watts. The family would like to thank Linda Hardman for her unconditional love and care for Bill. A memorial service will be planned in the future. Donations can be made to Ashley Addiction Treatment https://www.ashleytreatment.org/donate/

The family of William Charles Jones created this Life Tributes page to make it easy to share your memories.