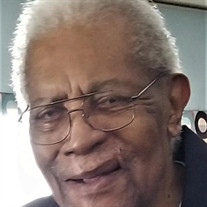 Elder William Henry Holley, son of the late John Henry and Mattie Virginia Holley was born February 4, 1925, in Perquimans County, North Carolina. He transitioned into heaven on October 10, 2021. He was 96 years old. William met and married his beloved wife of seventy years, the late Julia E. Holley and they finally settled in Delaware where nine children were born from this union. William was raised with seven Seaford siblings, two brothers and five sisters. He is survived by his beloved brother Clarence Holley. William was a kind and gentle man and was called to serve the Lord about 1960. He graciously accepted and pastored Holy Bethel Pentecostal Church, Milton, Delaware from 1980-1985. He trusted God completely and listened daily for God’s instructions. William enjoyed and loved serving the Lord. He was selfless, humble and wise beyond measure. He lived to please God and allowed God to order his steps. He was a great example of a man that followed God. William traveled as a minister and preached the word all over the Eastern Shore and had an annual standing engagement to minister in Winfall, North Carolina. William was an entrepreneur where he owned his own business cutting and hauling pulp wood with his sons. He also worked on and repaired vehicles. After being injured in 1975 he retired from pulp wood business. To continue to provide for his family he began raising and selling pigs and chickens which was his passion. He loved raising his pigs and you could find him outside with them any time of the day. He also enjoyed gardening for many years and yard work as well. William was preceded in death by his brother, John E. Holley; sisters, Annie B. Pettaway, Creecy Mae Seymore, Lucinda Seymore, Alice Combs and Mattie Banks; son, Elwood E. Holley; daughter-in-law, Sharon L. Palmer Holley; grandson, Markquell Bumbrey. Pop Holley or Mr. William as he was lovingly called also leaves to cherish his memories, eight children Sherwood W. Holley (Margaret), Mary E. Matthews (Ronald, deceased), Clarence R. Holley, Patricia A. Nichols (James), Peggy L. Hughes (Carlton, deceased), Barbara J. White (Edmund), Vonette Holley and Lynette Holley. He also leaves 22 grandchildren; 47 great-grandchildren; 18 great-great grandchildren; and a host of nieces, nephews, cousins and many adored friends.

The family of William Henry Holley created this Life Tributes page to make it easy to share your memories.

Send flowers to the Holley family.