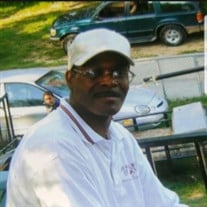 Wendell’s Life Wendell Anthony Stanford, son of the late Tyrone Steve Stanford and Cynthia Annette Handy, departed this life at the age of sixty (60) on February 12, 2022 at Genesis Rehabilitation Center in Salisbury, Maryland, surrounded by some his siblings. Wendell, as he was affectionately called, graduated from Washington High School in Somerset County. He enlisted into the United States Army in 1979 and served a number of years before being Honorably Discharged. Wendell worked at various jobs including Campbell Soup Company in Salisbury, Chrysler Corporation in Wilmington, Delaware, McDonalds in Perryville, Maryland and Pittsburgh Paint and Glass in Wilmington. Wendell may not have had biological children, but he truly loved all of his nieces and nephews, no matter how old. He had a very giving heart, no matter the cost to self. Despite the hardships he encountered, he always had a smile or a kind word to give. Wendell had a love of the outdoors and you could always find him ready for the next fishing trip. All it took was a phone call because Wendell loved to be around water. Wendell leaves to mourn his passing: three sisters, Patrina Stewart (CJ) of Salisbury, Maryland, Belinda Stanford of Salisbury, Maryland and Angela Handy of Princess Anne, Maryland; two brothers, Kevin Stanford (Rene) of Middle River, Maryland and Hank Handy of Princess Anne; his stepfather, Hanson Handy of Mount Vernon, Maryland; a great aunt, Reverend Gertrude Brown; his aunt, Sadie Wright of Salisbury; several beloved nieces, nephews and cousins; and last but certainly not least, we could not leave out his Baltimore Station Family who have pulled him through the trenches. Preceding him in passing (besides his parents) were his maternal grandparents, Katrina Buren and Van Buren; paternal grandparents, Robert and Malinda Stanford; a host of aunts and uncles and his nephew, Michael Handy. SUBMITTED WITH LOVE ~ THE FAMILY

The family of Wendell Anthony Stanford created this Life Tributes page to make it easy to share your memories.

Send flowers to the Stanford family.