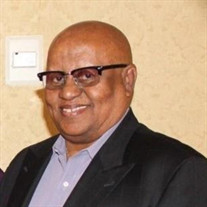 OUR BROTHER – WALTER   Give to him that asketh thee, and from him that would borrow of thee turn not thou away. Matthew 5:42    As we celebrate the life of our brother Walter Oliver Ginn, we see a generous and loving father and family man that brought joy to all that he met.    Walter Oliver Ginn was born April 20, 1950, to the late Raymond Smith and Geneva Dale Ginn.  He was the second of five children of this union.  He accepted Christ and was baptized at an early age.  He spread light quietly as he gave to many in his life.  He graduated from Worcester High School in Newark Md. and Morgan State University in Baltimore.  After Kraft Foods, Walter spent most of his adult career in Social Work in Baltimore, Md.  He worked for Friends Medical Center in West Baltimore; then, for Baltimore City Department of Social Services. His work brought him in contact with young people whom he nurtured, mentored, and became a role model for many. Walter volunteered his time and counted it joy to give back and create positive experiences for the young people in his supervision.   Walter enjoyed life and wished the same for others. He was kind, loving and outwardly empathetic to the needs of those around him. He had a great sense of humor and was devoted to his family. Two years ago, when his father left us to go to Glory, Walter and his siblings immediately began repairing, memorializing, and refurnishing their parents’ home. His parents would be so proud of what they did to maintain their home.    When Jim and wife needed a car, he gave them the loan of his coveted Mustang until they could afford one of their own. His best friend was his brother – Jim Ginn. Once Jim moved back to the Shore, Walter spent a portion of every holiday with him.   Walter was the family historian and loved to hear our family history, spending many hours of love researching and compiling our story. He spent quality time with family and friends, quietly embracing us and looking for ways to meet our needs. He was blessed with Ms. Tamara Lee, with whom he built a wonderful life.  Out of that union, was their daughter, Morgan who was truly the apple of his eye.  Walter was deeply devoted to Morgan.  He was directly involved in every part of her life.  When he took her and her cousin De’Nesha to Disney World in Orlando, Florida – and lost them in the crowd - he humorously told how he desperately looked for them, all the while revealing his great qualities as a father.     When Morgan expressed an interest in Oceanography, he quickly enrolled her in scuba diving lessons to prepare her for the future. He made certain that she attended charter schools that allowed her to excel as a gifted and talented young woman.  He talked to people, all that would listen about getting Morgan into the best college.  Morgan’s grandmother, Jean Lee called him, Son of her heart. He made a deep impact with little fanfare.  This is the heart that we are sending to God today.  We would like to conclude this tribute with a song that epitomizes our father, brother, relative, and friend. As we say, "Let the work I’ve done speak for me”    He leaves to mourn him; His daughter Morgan Ginn and Tamara Lee, his dedicated companion of 20 years. Brothers Archie Dale (Candace) of Snow Hill, Md., Raymond Ginn (Arlene) of Salisbury, Md., Sisters Genevieve Jones (Carl) of Piscataway, NJ and Darlene Ginn of Baltimore, Md. One Aunt, Marcylee Dedrick. Nieces and nephews; Derrick Dale of Snow Hill, Md, Tonya Ginn of Pocomoke, Md, Dr. Janelle Jones of Minneapolis, Minnesota, and Christopher Jones of Camp Springs, Md. A former wife of 8 years, Carnell Ginn and a host of cousins, relatives, and close friends.

OUR BROTHER &#8211; WALTER   Give to him that asketh thee, and from him that would borrow of thee turn not thou away. Matthew 5:42    As we celebrate the life of our brother Walter Oliver Ginn, we see a generous and loving father and family... View Obituary & Service Information

The family of Walter Oliver Ginn created this Life Tributes page to make it easy to share your memories.

Send flowers to the Ginn family.