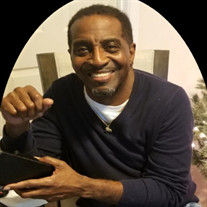 Von Tyrone Stewart, Sr. was born on Tuesday, February 13, 1962, at Saint Mary&#8217;s Hospital, in Brooklyn, New York, to his loving parents, Margaret Stewart, and the late Abraham Stewart. He was the eldest of six siblings. Von departed this... View Obituary & Service Information

The family of Von Tyrone Stewart created this Life Tributes page to make it easy to share your memories.

Send flowers to the Stewart family.