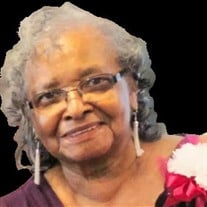 Vivian’s Life Legacy Vivian Elizabeth Hutchins Johnson, daughter of the late William J. Hutchins, Sr. and Minnie E. Henry Hutchins, was born on June 5, 1938 in Queen Anne’s County, Maryland. Vivian was the eldest daughter of thirteen (13) children. She departed this life on Sunday, March 13, 2022 at the age of eighty-three (83) after a brief illness. Vivian’s education began in the Queen Anne’s County school system. She graduated from Lockerman High School in Denton, Maryland. In school, she excelled in spelling and that was one of her favorite subjects. On February 16, 1963, Vivian was joined in holy matrimony with Walter M. Johnson, Jr. During their fifty-nine (59) years of marriage, they proudly raised 3 children. They started each morning with coffee and newspapers. One of their favorite nightly activities was watching The Wheel of Fortune, Jeopardy, Law & Order, their other prime time favorites and the 11:00 pm news together. Vivian began her work experience in Philadelphia, Pennsylvania. After returning home she was employed by Campbell Soup Company and she later became employed with General Foods (Kraft Foods/Heinz) and retired in 1994 after thirty (30) years. After retiring, Vivian decided to return to the workforce and worked as a cook at the Blue Heron assisted living facility in Goldsboro, Maryland. She enjoyed her time there and would always speak fondly of her clients there and talk about the meals she cooked for them. Vivian accepted the Lord at an early age. She was always active in the church. As a young child, youth and adult, she attended New Union United Methodist Church in Goldsboro, Maryland. When the churches merged into one, she faithfully attended New Beginnings United Methodist Church. She was an active participant in Sunday school and sang in various choirs in church. Vivian was an original member of the Starlight Gospel Singers for forty (40) plus years. They traveled and ministered throughout MD, DE, NJ and PA. She later became a member of Noah L. Beckett (NLB) Singers and New Generations Gospel Choirs. In addition Vivian was a founding member of the Women’s Gospel Choir and sang on other church choirs. Some of her fondest memories were of her times spent traveling and ministering. Vivian served on various committees, as trustee, PPR committee, United Methodist Women and was a certified Lay Speaker just to name a few. She faithfully attended weekly prayer service and Bible study. She was also an honorary member of Total Praise Dance Ministry. When COVID first happened, it was very hard for her because she missed her family and church family. Vivian was extremely excited to use Zoom and never missed a meeting or a chance to fellowship. Vivian loved children and would always try to keep special treats such as candy or gum on hand to give them in church. She never met a stranger and always managed to find special ways to connect with others. Whether it be through an inside joke or just simply calling or texting to check on them, she loved to stay in touch. Some of her favorite times were spent planning family gatherings such as Easter, Thanksgiving and Christmas dinner. Vivian loved calling around and getting the menu together and checking with family members to see what dish they could prepare for the event. The dishes that family members requested most for her to prepare were her macaroni and cheese, potato salad, watergate salad and hungry jack casserole. She enjoyed getting updates of what the children of the family were doing in school. Vivian truly loved her nieces, nephews, great-nieces and great-nephews. Her nieces and nephews affectionately called her “Aunt Bibbi”. This was a nickname given to her by her goddaughter Pam.  She took great pride in all their accomplishments and often spoke of how proud she was of all of them. Vivian was an avid puzzle solver. Cryptograms were her favorite. She also enjoyed sudoku, crosswords and word searches. As soon as she got her morning newspaper, the first thing she did was look for the puzzle section. She couldn’t get her day started until she had her cryptogram completed. If it was one that was especially hard or challenging to her, she would say “Whew, that one made me work!” Vivian’s sense of humor was unmatched. She enjoyed making others laugh and she always had a joke, funny facial expression or a comical observation that she would share. Her distinctive laughter would often ring out and could be heard in any room. Vivian was a people person who loved being around others. She was a friend to many. Vivian was preceded in death by her parents, husband, Walter M. Johnson, Jr., son, Bruce E. Johnson, sister, Shirley A. Wright, brothers, Thomas E., Allen L., Alvin O., and Samuel N. Hutchins, and several brothers- and sisters- in-law. Vivian leaves to cherish precious memories: her loving and devoted children, son Randolph Johnson, Sr. (Chung) of Colorado City, CO; daughter Kia McKinney of Denton, MD; grandchildren, Randolph, Jr. (Alicia), Deanna, Tamika (Dante), Trey (Ashley) and Brenna, fourteen (14) great grandchildren; one goddaughter, Pamela Brown; a special niece whom she often referred to as her “other sister,” Peggy McLaurin (Greg); surviving siblings, three brothers and four sisters, William A. Hutchins (Dorothy), Charles W. Hutchins (Mary), Ronald D. Hutchins (Jedina), Gloria J. Brown (William), Phyllis L. Duckery, Cynthia E. Demko (Peter) and Dorothy V. Hutchins and a host of nieces, nephews, cousins and friends. Lovingly Submitted, The Family

The family of Vivian Elizabeth Johnson created this Life Tributes page to make it easy to share your memories.

Send flowers to the Johnson family.