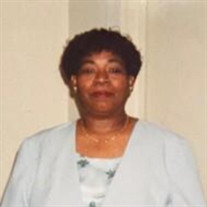 Vera Annette “Birdie” Peace, was born to the late Richard S. Peace and Dorothy M. Peace, on October 18, 1959. She departed this life on September 24, 2021, at Roanoke Memorial Hospital, in Ronoke, Virginia, surrounded by her daughters. She was 61years old. Vera received her education in the Caesar Rodney School District. She was employed as a school bus driver for 35 years for the following companies: Cool’s Bus Service, J & J Transportation and Bumblebee Transportation. She made sure you knew she was a “professional” driver. Vera was the rock to her family and a babysitter for everyone. Her door was always open to everyone in need. Vera loved to play old skool music while she cooked and cleaned. She was a dedicated bingo player, as she played from Sunday to Saturday. If you were riding with her, you’d better be ready to go early so that she could get her favorite seat. Vera was a very private person. If she was going through something, you wouldn’t be able to tell unless she told you, because she never complained. She always kept up her appearance and wore a beautiful smile all the time. All the kids loved to spend the night with her because in the morning she made pancakes as big as the plate. At the family BBQ’s everyone had their specialties. Vera’s was macaroni salad, Watergate salad and that good ole seasoned chicken. Vera was preceded in death by her father, Richard S. Peace; grandson, Juwan D. Peace; sister, Margaret Sarah Ames; brother William Satchell; nephew, Richard Peace; and niece, Don’Taijah S. Peace. Vera leaves to cherish her memory, mother, Dorothy M. Peace; three daughters, Tonya A. Peace (Michael), Melinda A. Peace (Wesley) both of Dover, DE and Pamela Peace (Willy) of Roanoke, VA; six sisters, Joanne E. Murry (Montly) of Felton, DE, Delores M. Peace (Tom) Teresa I. Peace, Sheila M. Peace, Kakia Scott (Aaron) and Paula R. Chambers all of Dover, DE; 16 grandchildren, DyShawn (Taylor), Antwon (Savana), Tywon (Khalia), Demarcus (Stasha), Natalia, Danajah (Zymire), Darrick (Danyae), Demetrius, Donaven, Tynayia, Deangelo, Alesha, Kenneth, Willy, Jr., Brett and Marsha; 13 great-grandchildren; the father of her children, Robert C. Young; and a host of nieces, nephews and friends.

Vera Annette &#8220;Birdie&#8221; Peace, was born to the late Richard S. Peace and Dorothy M. Peace, on October 18, 1959. She departed this life on September 24, 2021, at Roanoke Memorial Hospital, in Ronoke, Virginia, surrounded by her daughters.... View Obituary & Service Information

The family of Vera Annette Peace created this Life Tributes page to make it easy to share your memories.

Send flowers to the Peace family.