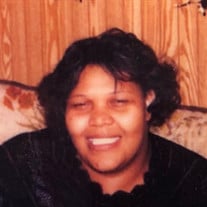 Vanessa Charlene Robinson, affectionately known as “Nessa”, was born on Sunday, February 24, 1957, in Seaford, Delaware, to the late Charles Edward Robinson, Sr. and Mary Elizabeth Robinson. She departed this life on Sunday, February 6, 2022, at the age of 64, while residing at Genesis Healthcare Center in Seaford, Delaware. While there, she battled a number of long-term illnesses. Upon graduating from Seaford Senior High School in 1975, Vanessa worked as a childcare provider. She soon began a career in the healthcare industry and found employment as a healthcare aide with Genesis Healthcare Center, in Seaford, Delaware. She was employed at Genesis from April 1989 until she became ill in January 2007. Nessa was a loving mom of three children, two boys and one girl. She enjoyed knitting, crocheting, and baking. The family was especially fond of her sweet potato biscuits. Nessa was also a fan of professional football. Her favorite teams were the Dallas Cowboys and the Oakland Raiders. Vanessa was preceded in death by her parents, Charles and Mary Robinson and her biological father, Asa Downing, Sr.; and a number of aunts, uncles, and cousins. Vanessa is survived by her children: Brandon Robinson (Troya) of Seaford, DE, Brittany Robinson of Salisbury, MD and Vernon Davis (Elysha) of Bridgeville, DE; sisters, Francine Jenkins (Linwood), Sandra Dorsey (Harmon) and Teresa Robinson all of Seaford, DE and Deedra Robinson of Groveland, FL; brothers, Jerome Camper (Carol) of Bear, DE; Asa Downing, Jr. (Monica) of Everett, PA and Charles Robinson, Jr., of Bethlehem, PA; grandchildren, Brandon Robinson, Jr., Dennis Smith, Jr., Dominic Smith, Demari Smith, Kemouri Robinson, Ayden Banks , Krystiana Mason and Rilyn Mason. Vanessa is also survived by a host of nieces, nephews, cousins and friends. Vanessa Charlene Robinson. In addition, she would have been extremely happy and proud to welcome a new grandchild to the family. Vernon and Elysha are expecting! “Nessa” will be greatly-missed. The family’s love for her is eternal!

The family of Vanessa C. Robinson created this Life Tributes page to make it easy to share your memories.

Send flowers to the Robinson family.