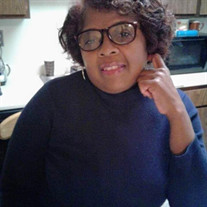 Trudy LaJuan Jones Conway, beloved daughter of Mary Wilson Jones and Rayfield Jones, was born on December 10, 1963 in Salisbury, Maryland. On Monday, October 25, 2021, Trudy departed from this life peacefully at home. Trudy received her formal education in the public schools of Wicomico County, graduating from Parkside High School in Salisbury, Maryland. She attended Delmarva Beauty Academy and became a Certified Cosmetologist . She then furthered her education at Sojourner Douglass and Wor-Wic Community College. Trudy, aka Reds, was such a loving spirit. She loved to cook and spend time with her family. She could make a variety of dishes, but one of her favorite dishes to make was pig feet or as she called them, “Trotters.” She would often get her mother to make fresh collard greens and candied yams to go with her “Trotters.” She had a very unique way with words. We all know Trudy could put words together so quickly and have you laughing all night long. It was never a dull moment with her. She also enjoyed reading a good book and would finish a James Patterson novel in a day. She loved listening to gospel music, going to church and reading the Bible. Trudy also enjoyed listening to Whitney Houston as well. Employed by Shore Up! Incorporated for over sixteen (16) years, she loved her job because she loved spending time with the kids. She later relocated to Baltimore, Maryland and was then employed by the Social Security Administration, as well as LaPetite Academy. At the time of her passing, Trudy was employed by Kiddie Academy. In addition to cooking, her passion has always been taking care of others and she was great at both. She was also blessed to be a member of “Mother Of Pearls.” Precious and loving memories of Trudy’s life will be cherished by: her mother, Mary W. Jones and father Rayfield Jones; three children, Allan Purnell, Jr, Sheree Garner “Muff” and Tara Smith “Tpot”; two sisters, Dana Jones “Fig” and Tiffany Jones; five brothers, Karlus Jones, Dewayne Jones, Jovan Jones, Darryl Jones and Laforrest Roxbury; her (Fab 5 grandchildren) as she affectionately called them, Jada Patton, Shakur Drew, Alorah Patton, Gavin Purnell and Ava Purnell; three god children, Takeisha Bivens, Jasmine Brawner, and Shaquille Domonique Cherrece; two special nieces, Kadijah Jones and Kyana A. (Boop Boop); another special daughter, Ebony Johnson (Chunky), as she called her; her favorite cousin whom she called brother, Rodney Grant; a very devoted, special friend of thirty-nine (39) years, Robin Buren and a host of special cousins, family, friends and co-workers. She will be dearly missed by everyone who had the pleasure of knowing her and being a part of her life. LOVINGLY SUBMITTED ~ THE FAMILY

The family of Trudy LaJuan Conway created this Life Tributes page to make it easy to share your memories.

Send flowers to the Conway family.