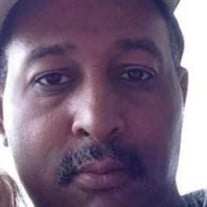 Timothy Antonio Brokenbrough, son of the late Raymond Brokenbrough, Sr. and the late Mary Bessie Watson Brokenbrough, was born June 29, 1966, in Kent General Hospital, Dover Delaware. He departed this life on September 25, 2021, at Bayhealth Hospital, Kent Campus, at 6:40 a.m. He was 55 years old. When Tim was a child, he loved being outside whether it was winter or summer, it didn’t matter to him. Tim loved traveling, going to the beach, attending car shows, going to the Farmers Market in New Castle, Delaware and Spencer’s Bazaar in Dover, Delaware. Tim loved to eat! When a new restaurant opened in town, Tim could tell you if the food was good. Tim didn’t have a driver’s license, but he didn’t let that stop him from traveling. He depended on his personal chauffer, Daryl. If Daryl wasn’t available, he caught the bus. He knew the schedule like the back of his hand. Growing up, WWF wrestling was the family’s favorite show. Saturday afternoons we all gathered around the television at our house or at our late Aunt Rebecca Benson’s, with all of our cousins. Tim also loved watching Power Rangers and Voltron. As Tim got older, he developed a passion for photography. He started with a disposable polaroid camera. We thought it was a phase he was going through, but as time went on people that knew him would say Tim loves taking pictures. He took pictures everywhere he went. Tim didn’t take pictures of nature or landscapes, rather, he chose to take pictures of people; God’s creation. Tim never married but he was married to the Lord and Savior, Jesus Christ. Tim always attended Love Temple, in Milford. The late Bishop Curtis Bordley, founder of this church, was a great inspiration and role model to Tim and his brothers. Bishop Coley said that Tim had a holy dance that he called “The Tim Shuffle”. Tim graduated from John S. Charlton, Camden DE 1984. He retired from Kent Sussex Industries in Milford, Delaware, 2019, much earlier than he wanted, but his health issues had another plan for him. Tim was a dedicated worker but Sundays was his time in church. In addition to his parents, Tim was preceded in death by his stepmother, Linda Brokenbrough; his grandparents, Alee and Isabelle Watson; and his uncle, Jimmy, as well as several cousins. Tim leaves to cherish his memory, siblings, Raymond Jerome Brokenbrough (fiancé, June Love) and Daryl Devon Brokenbrough, Arthur Lee Hopes (Rita Hopes), Andre Hopes, Arron Jerome, Dara Brokenbrough, Felecia Ray Lynn Price (Earl Price); nieces, nephews, great nieces and nephews; special aunt, Edith “Cookie” Watson; aunts, uncles and cousins from the Brokenbrough and Watson Families.

The family of Timothy A., Brokenbrough created this Life Tributes page to make it easy to share your memories.

Send flowers to the Brokenbrough family.