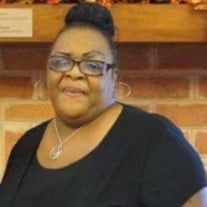 Sheila’s Journey... Sheila Kay Cropper, daughter of the late Nathaniel and Elsie Brittingham Cropper, was born on February 8, 1962. Following a lingering illness, God lovingly dispatched an Angel at Tidal Heath in Salisbury, MD, on Monday at 4:05 p.m. to receive Sheila unto him. Mother-Goose, or Sheila Kay as she was affectionately called, received her education in Worcester County public schools, graduating in 1980 from Pocomoke High School. Sheila accepted Jesus Christ as her personal Savior early in her life at St. James United Methodist Church in Pocomoke. She rededicated her life in 2007 after the passing of her mother. Sheila completed the Real Truth Bible Studies, where she graduated and received a certificate of achievement on October 12, 2008. Sheila began to sing with the Angelic Voices of St. James, sitting on the back with her harmonious voice. Her favorite songs were "Precious Lord Take My Hand" and "He Brought Me Through This, and He Brought Me Through That, Lord I'm So Grateful to You." Mother Goose was employed by the Oceanic Motel in Ocean City, MD, until her health began to fail. To know Sheila was to love her. She loved to cook and feed anybody who came to her door, sometimes asking for three or four dollars. She would even feed the stray cats that would come around and dare anybody to bother them. Sheila had many sayings, but one of her favorites was, "You're the Worst Kind." Sheila and Al met many friends and loved playing spades and bingo at the Lodge and the Eagles Lodge in Salisbury, MD. Sheila Kay loved life and lived it to the fullest. On Sunday, October 24, 2021, Sheila attended church, and when service was over, she said, "This would be my last time here." She was preparing us, but you are never ready to accept death. But God knows what is best for us. Sheila's light continues to shine in her one and only son, Shawn Cropper (Heather); three grandchildren whom she adored and loved with all her heart, Camille, Mia, and Malachi Cropper, all of Snow Hill, MD; two loving and devoted sisters, Malinda Tull and Jeanie Mason, both of Pocomoke, MD; two Godsisters, Peggy Dickerson and Christine Allen; three Godbrothers, Terry Marshall, Ricky Harvey and Christopher Brittingham; Goddaughter, RaChaya Timmons and a host of devoted nieces, nephews, cousins, other relatives, and many, many friends. In addition to her parents, Nathaniel and Elsie, Sheila was preceded in death by her Brother Louis, Sister Gail, Nephew Avrian, Brother-In-Law Bruce Tull, aunts, uncles, and the love of her life, Albert Marshall (Meat, Al), on January 26, 2021. Although Sheila is gone, to be absent from the body is to be present with the Lord. She fought a good fight; she finished her course and kept the faith. Henceforth there is laid up for her a crown of righteousness which the Lord the righteous judge shall give you at the day and not to you only but unto all of them also that love his appearance. Sorrowfully Submitted ~ The Family

The family of Sheila Kay Cropper created this Life Tributes page to make it easy to share your memories.

Send flowers to the Cropper family.