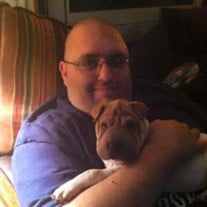 Ryan Stike, 44, of Delmar, Delaware, was called home on November 05, 2021. He was born on October 28,1977. Ryan was a talented artist, musician, songwriter & poet. However, Ryan's true gift was his ability to lift people up in their time of need & bring them to smiling laughter out of worry or sorrow. Anyone who had the blessing of knowing Ryan has been made better for it in some way. Ryan's faith was as huge as his heart. When you were near Ryan, you were near God. He exuded God's love. And so, while we mourn his loss, we trust that God has called his angel home; taking home the very best, to prepare for all the rest. Ryan is survived by his wife & best friend, Betty Adkins-Stike, who he worked with in accounting at Thermoplastic Processes of Georgetown, Delaware. He is also survived by their son, Nick Adkins, also of Delmar; his adored mother, Katherine Janz; stepfather, Nelson Janz; father, Walton Stike; sister, Kelley Stike; closest friends, Joe Taylor, Tiffany Ballman Lentz and Tim Pashall; many stepbrothers & sisters, cousins, aunts & uncles who are also mourning his loss. He touched so many lives and had many friends. Also mourning for Ryan are his five beloved wrinkle dogs, Tater Bug, Mr. Pickles, Aggy Boos, Lily Lou & Bubba Gump. Instead of sending flowers, Ryan’s family asks that you consider making a donation in Ryan’s name to Sharpei National Rescue at the link below. https://www.facebook.com/Sharpeinationrescue/ Poems: ~ God’s Garden ~ God looked around his garden and found an empty place. He then looked upon the earth and saw your tired face. He knew that you were struggling to breathe.He knew you were in pain. He knew that you would never get well on earth again. He saw your road was getting rough, your hills so hard to climb. He closed your weary eyes and whispered “peace be thine.” He put his arms around you and lifted you to rest. God’s garden must be beautiful. He only takes the best. It broke our hearts to lose you, but you didn’t go alone. Part of all of us went with you, the night God called you home. **************************** “ Some birds are not meant to be caged. Their feathers are too bright, their songs too sweet and wild. So, you let them go, or when you open their cage to feed them they fly out past you and are gone. And the part of you that it was wrong to imprison them here on earth rejoices. But still, the place where you live is that much more drab and empty for their departure. I miss my friend. “ Stephen King - Rita Hayworth & The Shawshank Redemption **************************** “ No, the journey doesn’t end here. Death is just another path. One that we all must take. A grey rain curtain rolls back, and all turns to silver glass. And then you see it. White shores and beyond, a far green country and a swift sunrise.” J.R.R. Tolkien - The Lord of the Rings

Ryan Stike, 44, of Delmar, Delaware, was called home on November 05, 2021. He was born on October 28,1977. Ryan was a talented artist, musician, songwriter & poet. However, Ryan's true gift was his ability to lift people up in their time... View Obituary & Service Information

The family of Ryan Michael Stike created this Life Tributes page to make it easy to share your memories.

Ryan Stike, 44, of Delmar, Delaware, was called home on November...

Send flowers to the Stike family.