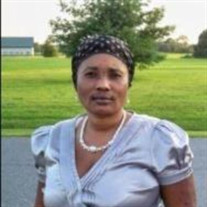 ROSENA’S LIFE Obituary Rosena Francois, at the age of forty-six (46), departed this life on Thursday, December 30, 2021 at Tidal Health in Salisbury, Maryland. The daughter of Dieudonne Francois and Aline Nazaire, Rosena was born on January 8,1976. In 2014, she came to the United States. During that time, she resided in Florida with her older sister and brother-in-law. At the end of 2014, Rosena relocated to Salisbury, Maryland with her older sister in order to find employment. She was able to work for Mountaire Farms in Millsboro, Delaware as well as Tyson’s, both for a short period of time. Rosena was united in holy matrimony to Lunick Charles. When she still lived in Haiti, one of her favorite hobbies was selling clothes. She was skillful in getting people to buy from her. Precious memories of Rosena’s life will be shared and remembered by: her seven (7) siblings—three (3) brothers, Larousse Francois, Oxon Francois and Robert Francois and four (4) sisters, Alina Francois, Violette Francois Estime, Alice Francois and Vida Francois; beloved nieces and nephews, Nana Dortilme, Chrisna Exilhomme, John Francois, Genel Estime, Gina Estime, Duckenson Francois, Ketsia Francois, Kattiana Francois, Wanchel Dormevil, Michelot Dormevil, Saul Jean Louis and Lovena Jean Louis; her brother-in-law, Gesner Estime and a host of other family and friends. LOVINGLY SUBMITTED, THE FAMILY

The family of Rosena Francois created this Life Tributes page to make it easy to share your memories.

Rosena Francois, at the age of forty-six...

Send flowers to the Francois family.