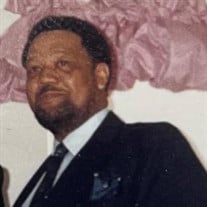 Ronald “Ron” James Gus Trader, 80, transitioned peacefully on 15 January 2022, with his family by his side at UM Harford Memorial Hospital in Havre de Grace, Maryland. Ronald “Ron” James Trader was born October 19, 1941, in Philadelphia, Pennsylvania, to Reuben Gayton and Rose Lee Trader. Ron received his formal education through the Philadelphia Public School System. Ron was employed for 33 years by Conrail, formerly the Consolidated Rail Corporation, where he was affectionately known on the job as “Bugga Lu”. He was a second generation Railroad Brakeman and retired as a Railroad Conductor in 2007. Ron was truly a Blessed man, for he enjoyed his work on the Railroad so much that he eagerly looked forward to going to work each day! Ron had an extensive record collection from back in the day and enjoyed listening to music, reading newspapers/magazines, and of course chatting it up with folks! As one of his daughter, Ronnie’s friends so perfectly stated, “he was the coolest dad, always smiling and making everyone laugh.” Back in the day, the young men in the neighborhood enjoyed talking with Ron and swapping albums, for those of you who know what an album is! In his recent few remaining years, Ron resided in North East, MD with his wife, daughter and son-in-law. Ron was preceded in death by his father, Reuben Gayton; mother, Rose Trader; and son, Randall “Heavy” Winfrey. Ron is survived by his beloved wife, Maryann Trader and leaves to cherish his memory one daughter, Ronnie “Bunny” Bell; one loving and devoted son-in-law, Alfred “Peter” Bell; one brother, Ossie “Piggy” Trader; three sisters, Lynette Bennett, Denise “Niecy” Bruce and Charmaine “Cookie” Trader; three grandchildren, Andrea Winfrey (Jay), Brian Bell (Giovana), Kabeer Anderson and Ameerah Anderson; five great-grandchildren; three nephews, Malcolm Wicker, Steven Trader and Hareed Trader; and four nieces, Rita Bruce, Deneen Reed, Sharon Wicker and Karen Wicker.

The family of Ronald James Trader created this Life Tributes page to make it easy to share your memories.

Send flowers to the Trader family.