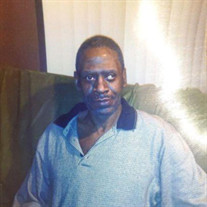 Robert Earl Hunter, the second of three children, was born in Cleveland, Mississippi, on January 28, 1963, to Mrs. Elma Hunter and Mr. James Earl Hunter, and departed this earthly life on Saturday, October 2, 2021. Known affectionately by family and friends as “Rob”, or “Daddy Rob,” Robert Earl Hunter was loved by many. Robert attended and graduated from Hutchinson School of Technology in Buffalo, New York and acquired vocational skills and training in the field of electrical technology. Robert was a member of Community Church of God in Christ (C.O.G.I.C), located in Buffalo, New York, where he received Christ as his Lord and Savior. Robert enjoyed watching football, playing basketball, and many other sports. Loving, kind, giving, and a resilient spirit are words that described him. Robert dedicated his life to his vocational skills training and worked jobs in the electrical industry. He touched many lives both young and old. He will always be affectionately connected and known for being a resident of the Ellicott Mall/Downtown Residential Housing complex. He will be greatly missed by all who knew him and loved him. Robert was preceded in death by his parents, James Earl Hunter and Elma Hunter. Robert’s memory and legacy will be cherished by his daughter, Teresa Hunter; brother, Johnnie, Hunter; sister, Dorothy Hunter; grandson, Jacob Samuel Hunter; cousins, Mesha Carey (husband, Jeff Carey); and a host of nieces, nephews, other relatives and friends.

The family of Robert Hunter created this Life Tributes page to make it easy to share your memories.

Robert Earl Hunter, the second of three children, was born in...

Send flowers to the Hunter family.