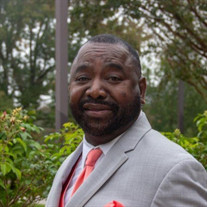 ROBERT’S JOURNEY... Robert Adrian Blaine Hamilton, Sr., a resident of Chance, Maryland, at the age of sixty-one (61), passed away unexpectedly on January 25, 2022 at home with family. The family is deeply saddened by his sudden death. He was born on June 18, 1960 to Arlena Deshields and Robert Hamilton. He received his education in the Somerset County public school system, and lived between Chance, MD and Elizabeth, New Jersey throughout of his life. Bobby, as he was affectionately known, was a man of many trades. He started off as a mechanic with his uncles in New Jersey. After coming back to Maryland, he worked as a waterman with Captain Stan Daniels and then worked as an electrician with Jerry Thomas at Thomas Electric Company. He loved spending time with his family and friends, but mostly with his children and grandchildren, whom he adored. Anyone who knew Bobby was touched by him. He was not only a father to his five children but he had a big hand in raising his siblings, cousins, nephews, and any child who came home with his children became one of his. Treasured memories will be cherished by: his wife, Martha Hamilton of forty-two (42) years; five children, Robert Hamilton, Jr. of Chance, MD, Lawrence Hamilton (Jennie) of Salisbury, MD, Ebony Smith (Tony, Sr.) of Fruitland, MD, Marcus Hamilton of Salisbury, MD and Timothy Hamilton (Rebecca) of Princess Anne, MD; ten grandchildren, Kalise Hamilton, Jameer Hamilton, Caydence Hamilton, E’Viana Dorn, Kyndall Hamilton, Tamia Hamilton, Carter-Rose Hamilton, Timothy Hamilton, Chloe Davis and Ervin Ware; a bonus daughter, Kimberley Saxton; his mother, Arlena Deshields; his father, Robert Hamilton; three brothers, Johnathan Hamilton of Salisbury, MD, Jerry Hamilton, Sr. and Tyrone Hamilton, Sr., both of New Jersey; two sisters, Keisha Hamilton and Darlene Byrd, both of Salisbury, MD; one special aunt/mom, Constance Holmes of Atlanta, GA; three uncles, Lawrence Holmes (Ann) of Willingboro, NJ, Levi Holmes, Sr. (Christine) of Durham, NC and Sherwood Holmes (Juanita) of Chance, MD as well as his nieces, nephews, extended family and an abundance of friends. We will all miss him more than words can say. Bobby was preceded in death by his sister, Arlene Byrd, his grandparents, Maggie Lockwood (Wallace) and John Holmes, his uncles, Sidney Holmes, Sr. and John Holmes, Jr. and one niece, Tyonna Morris. Lovingly Submitted ~ The Family

ROBERT&#8217;S JOURNEY... Robert Adrian Blaine Hamilton, Sr., a resident of Chance, Maryland, at the age of sixty-one (61), passed away unexpectedly on January 25, 2022 at home with family. The family is deeply saddened by his sudden death.... View Obituary & Service Information

The family of Robert Adrian Blaine Hamilton Sr. created this Life Tributes page to make it easy to share your memories.

Send flowers to the Hamilton family.