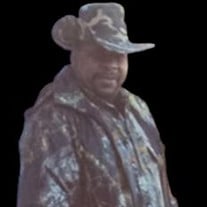 He loved to play softball and was part of Black minor baseball league. He was a great pitcher and catcher. His pitch was so fast that everyone was scared to catch. He was an avid hunter (a member of the NRA) and fisherman (who loved fishing with his wife, even though he had to bait her pole every time). He didn’t mind and he made it a yearly activity because they loved spending time together. He caught and killed everything he ate. He even caught record size rockfish that got his picture hung in Dave's Sportshop. His motto was, “I rather eat from the land than the stores; at least I know what they ate.” Raymond loved to cook and feed his family. He had the best wild food around. His and his wife's house was the place for family BBQ’s. Everyone waited in anticipation for his fried fish that he caught, cleaned and seasoned himself. He would hunt deer every year and he also started trapping raccoons in his last year. Raymond and his loving wife Dorothy (Taylor) Dew were together for more than forty (40) years, but married for nineteen (19) years after being united in holy matrimony on February 14, 2003. He used to call her his “Georgia Peach” because that's where she lived previously. Together they had five children and he also had five other children prior to their five. Mourning their loss, but enjoying memories of Raymond’s life and legacy are: his adoring and loving wife, Dorothy; his mother, Barbara Smith; his children—Raymond A. Cuffee, III (Lisa) with 8 children and 17 grandchildren, Carlos Dew (Lisa) with one child and one grandchild, Andernette Taylor, Latasha Dew with two children and one grandchild, Joseph Sessoms (Michelle) with two children; Yolanda Dew (Dennis) with two children and one grandchild, Rachel Dew with two children and two grandchildren and one on the way, Richard Dew with four children and five grandchildren and Danielle Dew with one child and one who passed away as an infant; siblings, Dwayne Cuffee, Edwin Cuffee, Roy Cuffee, Julia Giddens (Ronald), Joanne Short, Cherrie Jiles (Mike), Barbara Anne Williams, Laverne Taylor, Alfreda Rodriquez (Aristides) and Cleo Hayes; and a host of other relatives and friends. He was preceded in death by his grandmothers, Lillie Mae Mitchell (Momma, with whom he had a special bond because that was her Junior) and Julie Ryder-Morris, his grandfathers, his father, Raymond aka Diddley, his brother Henry, his nephew David and other dearly departed family. “To know him was to love him. He always had a joke to tell or trying to trick you to eat some wild. He will definitely be missed.” His Loving Family

He loved to play softball and was part of Black minor baseball league. He was a great pitcher and catcher. His pitch was so fast that everyone was scared to catch. He was an avid hunter (a member of the NRA) and fisherman (who loved fishing... View Obituary & Service Information

The family of Raymond Alfred Dew Jr. created this Life Tributes page to make it easy to share your memories.

He loved to play softball and was part of Black minor baseball...

Send flowers to the Dew family.