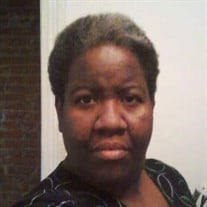 Rachel Ann Nixon, age 54, passed away on January 19, 2022, at Wilmington Hospital. The daughter of the late Alfonso Leroy Nixon, Sr. and Ann Mae Nixon, was born in Dover, Delaware on April 14, 1967. She was the fifth sibling of eight children. The love of God was in her heart at an early age. For the last 17, she’s been a faithful member of The Church of the Living Word Outreach Ministries Inc. After graduating from Dover High, Rachel attended Culinary Institute of America and worked several restaurant positions until having to retire. Not working didn’t keep Rachel from staying busy. As an advocate for HIV awareness, she received her associates degree in Human Services while raising two children. Her kids were her world. Nothing would get in her way of her being a mom. Family was next. She was on the next bus to make sure everyone was okay. Helping in the church, singing in the choir, bragging about her church family brought a smile to her face. She was educated in fine dining, but southern cooking graced her table. She watched African American films and comedies while playing Farmville. Don’t forget about music, she enjoyed her ole school and gospel. Being a soft-hearted soul, helping others was her mindset. She never felt like she had much but what was hers; was yours. God and family. That’s what she knew. She was preceded in death by her parents, Alfonso & Ann Nixon; her sister Charlene Moore and his brother-in-law Lee Moore (Billy); and a brother, Alfonso Nixon, Jr. Rachel’s precious memories will be cherished by her son, Marcus Alexander Nixon; her daughter, Lawren Olivia Marie Bradley; a brother, Anthony Nixon; four sisters: Agnes, Althea and Leslie Nixon of Dover DE and Edna Davis of Arizona; eight nephews, Loren, Damien, Gordon Jr., Daniel, Elijah, James, Titus and Norman; niece, Ann-Janette; aunt, Bettie Nixon of Savannah, GA; and her uncle and aunt, Nathaniel & Lena Nixon of Warner Robbins, GA. Thank you to everyone who prayed, texted, called, gifted, and visited during our time of bereavement. Special acknowledgements to Overseer Minnie Archy, Joletta Gibbs-Jackson and the members of COTLW Outreach Ministries. The Nixon Family

Rachel Ann Nixon, age 54, passed away on January 19, 2022, at Wilmington Hospital. The daughter of the late Alfonso Leroy Nixon, Sr. and Ann Mae Nixon, was born in Dover, Delaware on April 14, 1967. She was the fifth sibling of eight children.... View Obituary & Service Information

The family of Rachel Ann Nixon created this Life Tributes page to make it easy to share your memories.

Send flowers to the Nixon family.