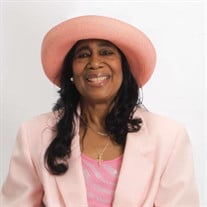 PASTOR ELSIE COLLIER’S LIFE AND LEGACY Pastor Elsie L. Collier, a former resident of Crisfield, Maryland, departed this life on Thursday, April 7, 2022, at home in Salisbury, Maryland, surrounded by her loved ones. She was born in Crisfield, Maryland on March 2, 1944 to the late James Lake, Sr. and Sarah King. She received her education in the Somerset County public school system. Pastor Collier worked at the Sewing Factory, Handy’s Soft Shell Crabs, Mrs. Paul’s Kitchen and Campbell Soup Company. While residing in Crisfield, Pastor Collier received many honorary awards and certificates. Some of her accolades include Certificate of Recognition for her commitment from the Governor of the State of Maryland, Certificates of Appreciation from the Mayor of Crisfield, and Omega PSI PHI Fraternity, Inc., Certificate of Honor from St. Paul African Methodist Episcopal Church in Crisfield, and Hall of Fame Award from Somerset County Branch NAACP. In 1979, Pastor Collier became a member of the Salisbury Evangelistic Church of Deliverance Ministry in Princess Anne, Maryland at the Civic Center Pinto room, where she was a part of the Pastor’s Aide Committee. She served as a Trustee Board Member during the establishment of the church on West Road in Salisbury, Maryland for approximately eight years. Pastor Collier was licensed as an Evangelist under Apostle Margaret Johnson during the year of 1985 and served as Vice President for several years. In 1992, Pastor Collier was the founder of Help Our Children Foundation in Crisfield, Maryland. She always had a love for helping other people, especially children who needed extra encouragement. She always would extend a helping hand to those in need. In 1999, she married William Calvin Collier, Sr. Pastor Collier was very zealous and enthusiastic about her walk with God. She didn’t mind serving in any capacity while doing God’s work. She was the Founder and Pastor of Faith, Hope and Charity Ministries in Crisfield, Maryland. Pastor Collier and Bishop Collier were all about loving God and his people. Precious memories of Pastor Collier’s life will be cherished by: her devoted and loving husband, Bishop William Collier, Sr., and her five children to whom she was a loving mother, Gladys Williams of Salisbury, MD, Lynne Thompson (Michael) of West Melbourne, FL, Lydia Thomas (Johnie) of Salisbury, MD, John Lee, Sr. (Barbara) of Melbourne, FL and Debbie Bell (Clarence) of Marion, MD; bonus daughter, Annie Culbreath (Wayne) of Lumber Bridge, NC; one brother, Ronald Fosque of Laurel, MD; one sister, Alicia Whittington of Pocomoke, MD; fifteen (15) grandchildren; thirty-eight (38) great-grandchildren and a host of nephews, nieces, cousins, and friends. In addition to her parents, she was preceded in death by three brothers, Samuel Hickman, James Lake, Edward Lake, and one sister, Laverne Fosque. LOVINGLY SUBMITTED ~ THE FAMILY

PASTOR ELSIE COLLIER&#8217;S LIFE AND LEGACY Pastor Elsie L. Collier, a former resident of Crisfield, Maryland, departed this life on Thursday, April 7, 2022, at home in Salisbury, Maryland, surrounded by her loved ones. She was born in Crisfield,... View Obituary & Service Information

The family of Pastor Elsie Lee Collier created this Life Tributes page to make it easy to share your memories.

Send flowers to the Collier family.