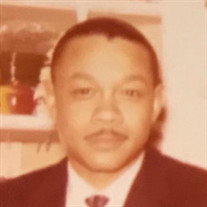 Not sure what to send?

Mr. Owen Maurice Wallace, Sr., was born on January 2, 1925, in Preston, Maryland, to the late George and Susanna Wallace. He departed this life on December 25, 2021, at home, with his family, after a brief struggle with heart disease. Mr. Wallace attended and graduated from Moton High School in 1942, in Easton, Maryland. He was a four-year honor student, Editor-in-Chief for the high school newspaper, and enjoyed wrestling and driving fast cars. Growing up in Eastern Shore, Maryland, Mr. Wallace spent many summers crabbing on the water, boating, and swimming with his brother, Joseph, and cousins. In 1943, Mr. Wallace was drafted in the US Army and served as a Medic, 103rd Quartermaster Battalion, World War II, The European Theater. After being honorably discharged in 1945, he moved to Philadelphia, Pennsylvania, with his brother, Joseph to seek employment at the US Post Office. Mr. Wallace worked as a clerk until 1947, when he received a G.I. Bill to attend Howard University to study Business Administration. During his time in college, Mr. Wallace was an avid swimmer, and spent much of his free time training and sparring his fellow boxers with his “Sweet Left Jab”. In 1948, when Mr. Wallace returned to Philadelphia, he was promoted by the US Post Office to Supervisor and General Foreman until his retirement in December 1984. One of his most beloved pastimes was driving fast cars. He fulfilled that passion by working part time at Potamkin Chevrolet for many years selling the latest cars to post office personnel. He had a new car every week, and he always knew when to seize an opportunity. Later that same year, Mr. Wallace was introduced to his beautiful soon to be bride Audrey Jolly, and they were united in holy matrimony on July 2, 1952. They were married for 67 years until her passing in 2019, and from this union, they were blessed with two incredible children, Kimberly and Owen, Jr. Mr. Wallace was a man of few words but was known for always dressing in his monogramed tailored shirts and sharply pressed suits. He had a huge impact on the lives of those who knew him. Mr. Wallace was confident, intelligent, and had a winning attitude. He was an avid boxing aficionado and loved gathering with his family around him to watch the latest boxing match on HBO. He would tell the stats on each boxer and predict who the winner would be, and he was usually right! Mr. Wallace was a man before his time and consumed vitamin supplements and wheat grass 40 to 50 years before it became popular. Because of his great health and athleticism, he had a walking pace that rivaled younger people, and would boast daily of his 7-mile treks around Saint Joseph University’s track field. Mr. Wallace was kind, loving, and generous,. You always knew exactly where he stood, never having to argue his point. He enjoyed showering his family with love and affection and was always present in his family’s lives. He attended all of his children and grandchildren’s events and school activities, no matter how big or small. He was always their biggest fan. Mr. Wallace was preceded in death by his beloved wife, Audrey, whom he absolutely adored; and his brother, Joseph T. Wallace. He leaves to mourn, his daughter, Kimberly and husband James Logan of Smyrna, DE; son, Owen Maurice, Jr. and wife, Traci Wallace of Middletown, DE; grandson, Tariq and wife, Heather Wallace of Dover, DE; granddaughter, Asia and husband, Michael Tran of Wilmington, DE; grandsons, Christopher and Matthew Burney of Philadelphia, PA; great-grandchildren Lorenzo Tran, Everleigh Wallace, and Christopher “CJ” Burney; sister, Phyllis Elizabeth Wallace; special niece, Joanna Hinton; and a host of nieces, nephews, cousins, friends, and grand-puppies.

Mr. Owen Maurice Wallace, Sr., was born on January 2, 1925, in Preston, Maryland, to the late George and Susanna Wallace. He departed this life on December 25, 2021, at home, with his family, after a brief struggle with heart disease. Mr.... View Obituary & Service Information

The family of Owen M. Wallace Sr. created this Life Tributes page to make it easy to share your memories.