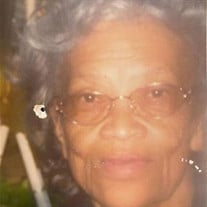 Minnie Arsula (Hatton) Feddaman passed away on Saturday, December 25, 2021, in her home of Dagsboro, De surrounded by family. She was born December 20, 1928, to the late James and Fannie (Parker) Hatton of Pungoteague, Va. Minnie was the 6th child out of 12 children. She received her education in the Accomack Educational system and often spoke about attending Shiloh Baptist Church in Boston, Va. She later joined Bible Church of Christ in Dagsboro, DE and served as an usher until her health began to fail. Minnie grew up learning how to cook and clean. She would often share how she was always in the kitchen. This was evident throughout Minnie’s adult life. She was known for her Sunday breakfast and daily dinners made from scratch. She took pride in her home from the cooking, cleaning to gardening. Any given day Minnie was seen moving through her house cooking and ironing all while babysitting someone’s child. Minnie became a young mother in 1945 and gave birth to the late Herbert Edmonds. She married the late Randolph Feddaman in 1949 and they resided between Chincoteague, Va and Millsboro, De for several years before settling in Delaware to raise their family. Although Herb remained living in Virginia with Grandmom Fannie; road trips and summer vacations back home to Virginia were very common. She was a homemaker for a considerable number of years, assuming the responsibility of the family caregiver and neighborhood daycare provider. She started working at Vlasic Foods in 1982 and retiring after 12 years of service. Never officially giving up the role she resumed her duties of the family babysitter. Minnie’s life reflected her love and commitment to her family. She was a straight talker with a no none sense attitude, and it was these attributes and this level of commitment that kept her family going. Life may never have been perfect, but it was her presence that created the perfect memories. She was preceded in death by her husband of 44yrs Randolph Sr., son Herbert Edmonds Sr., 3 sisters: Catherine Satchel, Lynn Hatton, Janie Jubilee and 5 brothers: Albert Hatton, Alfonzo Hatton, Horace Hatton, Melvin Hatton and James (Boss) Hatton. She leaves to cherish in her memory sister: Ernestine Edmonds, brothers: Wesley Hatton Sr. and William Hatton Sr. (Mary) 4 Children: Beatrice Justice (Wilbur), Lola Mason (Brodes Sr.), Randolph Fidderman Jr. (Barbara), and Jerome Fidderman Sr..2 Special Daughter-In-Laws Willa Edmonds and Deborah Fidderman 10 Grandchildren: Brodes Mason Jr., Sharon Wise, Richelle Clark(Terenda), Gerald Fidderman, Jerome Fidderman Jr.(Tammy), Herbert Edmonds Jr., Cheryl Chambers, Wallace Wise Jr. (Donna), Kristina Fidderman, Cortez Vann(Lauren), 23 Great-Grandchildren, 23 Great- Great Grandchildren and a host of cousins, nieces, nephews and friends.

Minnie Arsula (Hatton) Feddaman passed away on Saturday, December 25, 2021, in her home of Dagsboro, De surrounded by family. She was born December 20, 1928, to the late James and Fannie (Parker) Hatton of Pungoteague, Va. Minnie was the 6th... View Obituary & Service Information

The family of Minnie Arsula Feddaman created this Life Tributes page to make it easy to share your memories.

Send flowers to the Feddaman family.