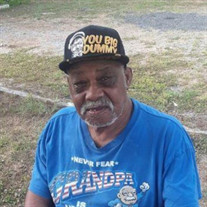 MILTON’S LIFE Milton Leonard Jr., a resident of Berlin, Maryland, was called to eternal rest on Sunday, January 30, 2022 at the age of eighty-six (86) following a short illness at Genesis Rehabilitation Center in Salisbury, Maryland. Milton, formerly known as “Junior,” was the son of the late Milton Leonard, Sr. and Agnes Leonard. He was born on February 7, 1935 in Millsboro, Delaware. Milton was employed at Showell Poultry for many years until he retired. He also was a Poultry Grower. He was a man of few words, but in his spare time before his disability, he loved to help the neighborhood children, who called him “Pop”, to repair their bicycles. Milton had many hobbies, one of which involved working with wood. This included building bird houses and mailboxes. He also liked tinkering on cars and fishing when he was able. His favorite pastimes were watching baseball, especially the “Baltimore Orioles”, westerns and collecting old model cars and trucks. Fond memories of Milton’s life will be cherished by: one daughter, Agnes “Teddy” Johnson of Berlin, Maryland; one granddaughter whom he raised as a daughter, Lisa Purnell (Chris) of Berlin, Maryland; three sons, Rufus Johnson (Golinda) of Salisbury, Maryland, Junior Johnson of Seaford, Delaware and Bobby Johnson of Berlin, Maryland; two sisters, Anna Mae Hopkins of Laurel, Delaware and Esther Hudson of Millsboro, Delaware; one brother, Carl Leonard and a host of grandchildren, great grandchildren, nieces and nephews. Milton was preceded in death by a dedicated companion, Ocie Copes, his son, David Johnson and two brothers, Tommy Leonard and Harrison Mumford. Lovingly Submitted ~ The Family Lovingly Submitted,

The family of Milton Leonard Jr. created this Life Tributes page to make it easy to share your memories.

Send flowers to the Leonard family.