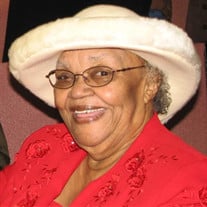 Mildred Delores Murray, passed away on December 19, 2021, at Bayhealth Hospital in Milford, Delaware. Mildred was born in Ridgely, Maryland, on June 27, 1934, to the late John Wesley Seth, Sr. and Mary Elizabeth Seth. Delores, lovingly known as Lorse, was one of nine children. She was educated in the Caroline County School System and eventually graduated from Lockerman High School. After graduation, she married her high school sweetheart, Charles "Bud" Murray, on December 24, 1955. This year would have marked their 66th anniversary. Delores had several jobs which included, but not limited to nursing, factory work and cleaning houses. Her favorite job out of all of them, was working with WIC (Women, Infants and Children). She was known to say "these are my WIC babies". She loved her job so much that she would take her grandkids to work just to hang out. In 2000, she retired from WIC after working there for 21 years. Delores loved to do many things, such as, taking care of her plants, doing puzzles, working as a deaconess for her church, and being a grandmother. Taking care of "Daddy" was her favorite pastime. Whenever you came to Lorse and Bud's house you would get a home cooked meal. Nobody left hungry. Some of her specialties were potato salad, German chocolate cake, haystacks, and fried bread, just to name a few. No matter who you were or where you were from, the littles to the oldest, you were home. In addition to her parents, Delores was preceded in death by three brothers; three sisters; and two sons, Darrell L. Murray and Dwayne P. Murray, Sr. (Stephanie). Left to treasure a legacy of memories is her husband, Charles Murray; daughters and honorary son, Charlene Murray, Tonnette Norwood, Febra Purnell, Luchell Stevens (Freddie), Jana Williams and Terrence Nichols (Denise); grandchildren, Dwayne Murray, Jr., LaDonna Murray, Nicholas Murray, Shamika Griffen, Von Jarmon (La'Kisha), James David (Maia), Lumekka Sydnor, Tylar Williams, Karl Murray, Krishawna Hynes, Freddie Willis, Jermaine Willis and Iona Caldwell; sisters, Marjorie 'Betty" Murray and Vivian "Marie" Seth; godson, Luke Hicks; goddaughter, Yevette D. Chester; and a host of great-grandchildren, great-great grandchildren, nieces, nephews, cousins and loving friends.

The family of Mildred Murray created this Life Tributes page to make it easy to share your memories.

Send flowers to the Murray family.