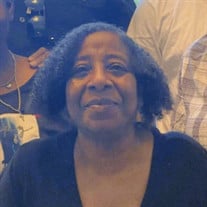 The Legacy of Meta Meta Bessie Anne Handy, a resident of Webster, Texas, passed away on Monday, February 7, 2022 at the age of sixty-six (66) at 1:32 pm of heart failure at Clear Lake Hospital. She was born on December 22, 1955 in Upper Hill Fairmount, Maryland. She was one of six children born to the late Darlene Johnson and Rayfield Handy, Sr. Meta grew up in Upper Hill, Maryland, until they moved to Salisbury, Maryland. She gradated from Washington High School in Princess Anne, Maryland. She was a hard working woman who provided for her family. Some of those jobs she held included Perdue Farms and Sunshine Laundry, both in Salisbury, Maryland and Target of Pearland, Texas. She moved to Pearland, Texas in 2005 and was a lifetime member of Non Denominational Fellowship Center Church under the late C.P. Wilson and Catherine Wilson. After it dissolved, they relocated to Texas becoming Word Fellowship Center Church, still under the leadership of her late Pastor C.P. Wilson. After his death in 2017, the church name was changed to what it is today, Word Fellowship Christian Church, under the leadership of Pastor Regina Wilson. Meta carried the Pastor’s bag, something in which she took great pride. She also recorded the services every Sunday, which was another duty she took very seriously and did such an excellent job for her church, which she loved dearly. Meta also enjoyed doing her puzzles and making her arts and crafts which she proudly gave away. Meta always kept a smile on her face no matter what she was going through. She had a very giving heart and if she had it, she would give it to you. She made sure she remembered every birthday and anniversary and she made sure she called you on your special day. She was special in her own way and touched a lot of people. She was truly loved and will be missed. Cherished memories will remain with: two surviving daughters, Crystal Spencer (Hubert River) and Lashonda Handy (Lorenzo Collick), both of Salisbury, Maryland; two siblings, Marshall Handy (Cindy Handy) of Pearland, Texas and Hope Handy (Robert Handy, Sr.) of Houston, Texas; thirteen (13) grand grandchildren, Devont’e Robinson (Breshell Morris-Robinson), Naz-ja Boston (Jamon Sheppard), Terry Whittington, Jr. and Lori Spencer, all of Salisbury, Maryland, Edward Spencer of Cambridge, Maryland, Miracle Belote, Larry Spencer, Karen Spencer, Tess Spencer, Rayfield Spencer and Hubert River, Jr. (unborn), all of Salisbury, Maryland; six great grand children, Mariah Nelson of Dover, Delaware, Logan Robinson of Cambridge, Maryland, Nykayla Heath of Cincinnati, Ohio and Jalah Boston, Jamori Sheppard and DeAndre Hudgins, all of Salisbury, Maryland and a host of nieces, nephews, cousins, aunts, uncles and friends. She was preceded in death by one sister, Sharlene Hoskins, and two brothers, Rayfield Handy and Terry Handy, her maternal grand parents, William and Luvenia Johnson, along with her paternal grandparents, Sidney and Bessie Handy and three grandchildren, Miracle Boston, Ramond Rivers and Ramon Rivers. SUBMITTED WITH LOVE ~ THE FAMILY

The Legacy of Meta Meta Bessie Anne Handy, a resident of Webster, Texas, passed away on Monday, February 7, 2022 at the age of sixty-six (66) at 1:32 pm of heart failure at Clear Lake Hospital. She was born on December 22, 1955 in Upper Hill... View Obituary & Service Information

The family of Meta Bessie Anne Handy created this Life Tributes page to make it easy to share your memories.

The Legacy of Meta

Send flowers to the Handy family.