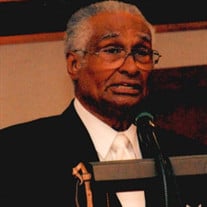 Melvin Charles Hickerson, 99, born November 25, 1922, in Camden, New Jersey, to Abraham Hickerson and Mabel Mosley, went to sleep in the Lord, December 18, 2021, at Bayhealth Hospital, Kent Campus, in Dover, Delaware. Melvin, one of nine siblings, moved to Cheswold, Delaware, as a child and was raised by his great-uncle and aunt, John and Cornelia Johnson. Melvin married his sweetheart, Blanche Lucretia Hughes, on September 3, 1942. In 1943, he was drafted into the U.S. Army during WWII and served in the South Pacific. Honorably discharged from military service, he returned and earned a Bachelor of Science degree in Industrial Education at Delaware State College. He also did graduate studies at NYU and Morgan State University. He began his teaching career for the State of Delaware at Louis L. Redding High School in Middletown, Delaware, and William Henry High School in Dover, Delaware, teaching mathematics and auto mechanics. When Kent County Vocational Technical High School opened, he was asked to develop the Auto Mechanics Department. He taught there until retirement. In 1938, Melvin was reborn in baptism through studies with Pastor William L. Cheatham, Sr., and joined Bethuel Seventh-day Adventist Church in Dover, Delaware. He was very active in his church and loved sharing the gospel message to others. He served as Elder/Head Elder for many years until his health started to decline, after which he served in an honorary position. He was a lay pastor, served on the Allegheny East Conference Committee and the Columbia United Executive Committee (per the request of then president, Neal C. Wilson.) Elder Hickerson loved evangelism and assisted many pastors in tent evangelism, giving numerous Bible studies and seminars. He helped in church planting with some of the pastoral “Trailblazers” of the denomination such as William L. Cheatham, Sr. who treated him like a son, Nelson Bliss, and John F. Street. He directed and loved to sing tenor in the church choir and sang duets with many members. He helped in VBS every summer, taught adult Sabbath School, and was involved in the financing, building, maintaining, and renovating of the church building. Elder Hickerson was a well-loved, active member of Bethuel Seventh-day Adventist Church for over 83 years. Other activities of interest included gardening, home construction, automotive mechanics, violin, cooking, photography, spending time with his grandchildren-especially the boys and the go-cart fun, causing his wife to affectionately call him “My Little Boy”. He is survived by his beloved wife, Blanche Hughes Hickerson; two children, Charles M. Hickerson and Karen H. Hamlin (James); 10 grandchildren; 17 great-grandchildren; 19 great-great-grandchildren; sisters, Pauline Jackson and Peggy Fisher; and many nephews, nieces, cousins, friends and neighbors. “His Lord said unto him, Well done, good and faithful servant; thou hast been faithful over a few things, I will make thee ruler over many things; enter thou into the joy of thy Lord.” Matthew 25:23 (KJV)

The family of Melvin Charles Hickerson created this Life Tributes page to make it easy to share your memories.

Send flowers to the Hickerson family.