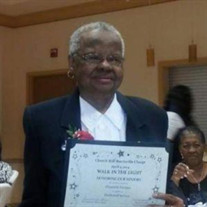 Mary’s Journey... Mary “Elizabeth” (Wilson) Forman was born on January 21, 1927 near Centreville, MD, to the late George and Mary (Brown) Wilson. She entered her eternal rest peacefully on Tuesday, September 14, 2021 at Anne Arundel Medical Center in Annapolis, MD. She was raised with four sisters and two brothers. Elizabeth was educated in Queen Anne County in Hope, MD and graduated in 1944. Her employment included domestic housekeeping, Caroline Poultry in Denton MD and Campbell Soup in Chestertown, MD for twenty years, from where she retired in 1982. She then worked as a housekeeper and caregiver for a private family, a cook for a restaurant near Centreville and lastly for Queen Anne County as a caregiver for several at-home clients. She was married to the late Isiah Forman, Jr. for forty-three (43) years, who passed away on September 14, 1988. From this union they raised three children, Shirley, James and Patricia, with a Christian upbringing. She was a faithful member of Mt. Olive United Methodist Church in Hope, MD, until it closed and then she became a member of Mt. Vernon United Methodist Church in Church Hill, MD. Throughout the years, she held many positions as Usher, Secretary, Treasurer, Communion Steward, Worship Leader, Vacation Bible School Teacher and a member of the Women’s United Methodist Christian Society. She also sang in the choir, helped with the children’s choir and was a Prayer Warrior of great faith. Elizabeth was a woman who loved her family very much and would express that love time and again, always willing to help in the time of need. Whenever anyone was ever introduced to the family, the hugs were given instantly and again whenever you came for a visit. She would often bake her famous pies and apple dumplings for the family to give to you as you were on your way out the door. Time with family was very important to her and we would get together as often as we could. She was a woman of truth and very to the point in telling you what she had to say. As COVID19 closed the churches, she would sit in her favorite spot on Sundays, after our zoom church service, and watch Gospel videos on YouTube the rest of the day and night. She looked forward to that every Sunday, usually starting with “This Morning When I Rose.” With the many health issues she had, she would always fight her way back. She had earned the name of the Energizer Bunny because she “took a licking and kept on ticking.” But her battery was too low and there was nothing left to energize. She was ready to go home. To God be the Glory, “no more pain.” She will be truly missed. Elizabeth was preceded in death by three sisters, Sarah Sewell, Catherine Moore and Corrinn Fields, two brothers, Melvin and Marion Wilson, one daughter, Shirley Wilson and one grandson, Reginald Wilson. She leaves to cherish precious memories: her son, James Forman (Emma) of Baltimore, MD; her daughter, Patricia Brittingham of Queen Anne, MD; her oldest sister, Lucy Tucker of Philadelphia, PA; one sister-in-law, Margaret Wilson of Philadelphia, PA; four grandchildren; eight great grandchildren; five great-great grandchildren, with two more on the way and a host of nieces, nephews, extended relatives and friends and one who called her mom, Jimmy Smith. LOVINGLY SUBMITTED ~ THE FAMILY

The family of Mary Elizabeth Forman created this Life Tributes page to make it easy to share your memories.

Send flowers to the Forman family.