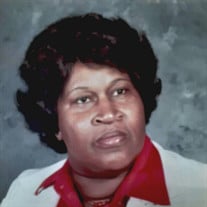 Martha Mae Cherry, was born on Friday, March 13, 1936, to the late Elmer Cherry of New Port News, Virginia, and Ella Louis Sheppard of Federalsburg, Maryland. She departed this life early Wednesday morning March 3, 2022, at Pinnacle Nursing Facility in Smyrna, Delaware. She is the last of 16 children. She was raised in Federalsburg, Maryland and then Seaford, Delaware. Martha attended Blocksom School, Frederick Douglas, and graduated from William C. Jason Comprehensive High School, in Georgetown, Delaware. She attended beauty school and nursing school, where she received her certifications to do hair. Martha became the hair dresser to her nieces and friends. Martha also worked for Caroline Poultry Burris as a side job, to make ends meet. She relocated to Wilmington, Delaware, and worked at St. Francis Hospital Emergency Department, as a visiting nurse. Martha was a member of Church of God in Seaford, Delaware. She also attended Rev. Spaies Church in Milford, Delaware. Martha later became a member of Refuge Temple Revival Center, under the late Apostle Leon and Ethel Williams. Martha was a very stern disciplinarian while at Refuge. She spoke her mind when she felt she had to do so. Martha would have the youth at her house for dinner between services. Martha and her sisters were gospel singers known as “The Gospel Redeemers”. She had an awesome soprano voice. Martha loved to cook and would feed anyone. Martha was a true friend and supporter. For a short period of time, she helped to raise her nephew and niece, Charles and Elaine Cherry. When her mother passed away, Martha also helped to raise her nieces, Venida and Victoria. Martha leaves to cherish her memory, nieces, Elaine Cherry Hitches (Michael), Venida Jacobs-Martin and Victoria Jacobs -West (Eugene); her only surviving aunt, Melva Crumble Hill; and a host of nephews, nieces, cousins and friends.

The family of Martha Mae Cherry created this Life Tributes page to make it easy to share your memories.

Send flowers to the Cherry family.