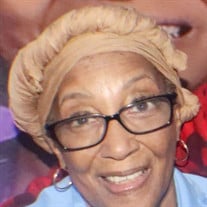 Marilyn Jean Motley, affectionately known as "Sister", was born on July 8,1941, in Philadelphia, Pennsylvania, to the late Cleo and Alfred Brown.  Marilyn was raised by Sina Smith and grew up in South Philadelphia. She graduated from South Philadelphia High School. After high school, in 1966, Marilyn was united in marriage to Harry James Miller. and that union was blessed with five children.  On October 17,1994, Harry, Sr. passed away.  Marilyn was the true matriarch of the family and was a role model.  She loved reading books. Her favorite book was the Bible and her favorite books in the Bible was Psalms and Revelations. Reading God’s word inspired her so much that she decided to start a Bible class, teaching children and adults.  Marilyn was baptized on September 19,1976, by Reverend Camila Brown, at New Birth United Holiness Church in Philadelphia.   Marilyn had many achievements including graduating from cosmetology school in 1979 then opening her own Beauty shop.  Additionally, in 1982, she received her Certificate of Ordination as a Minister. In 1985, she attended PCC Career Institute in Philadelphia to become a nursing assistant. In 1988, Marilyn went to school for Practical Nursing at Chester Upland. In March of 1996, she became a licensed nurse. She received an award for computer training in March 2002; a certificate for Evangelistic World Outreach, Inc., in July 2006; Certificate of Ordination the Gospel Ministry, in October, 2007; Christian World of College of Theology Bachelor of Ministry, in July 2009; and a Certificate of Appreciation Minister Award, in June 2014, for teaching Vacation Bible School.  Marilyn loved staying up talking with her granddaughter, sharing memes and going over family history. She often prayed together with her family and friends.  She liked watching TV and movies. She especially liked "In Our Mothers' Gardens” (on Netflix) with Dr. Koko @comptonauthor and summer of soul movies. Marilyn liked watching a few episodes of Lovecraft Country. The first episode she watched, she covered her eyes for most of the ending with her granddaughter. Marilyn enjoyed trying new foods and fixing the healthy version of her favorites every night. Her favorites included liver and onions, watermelon, snow crabs, liverwurst, sherbet and butter almond ice-cream. She also enjoyed baking cookies. She treasured teaching her family how to garden, from her flowers, herbs and vegetable garden and the art of making soap. She derived much pleasure from crafting and was always creating. She had to stay busy. While working, she loved humming songs like "What a Friend We Have in Jesus". In addition, she liked to sing songs by Sly and the Family Stone as well as all the Mahalia Jackson songs. She LOVED listening to gospel! Not only did she listen on Sunday, but also while writing her sermons, curling her hair, and painting her nails. Later, Marilyn met and married Jacob Motley and they made their life in Seaford, Delaware, until his passing on 3/16/2016. Marilyn leaves to cherish her loving memories, five children, Renee Brown, Sharon Brown-Myers (Roy); Harry J. Miller, Jr. (Korey), Zaccheus Miller and Keith Miller; one sister, Edna Jackson; one foster brother, Austin Quick; one foster son, Harold Alexander; one godson, Mark Upshur; 14 grandchildren; 37 great-grandchildren; and a host of nieces, nephews, cousins and friends.

Marilyn Jean Motley, affectionately known as "Sister", was born on July 8,1941, in Philadelphia, Pennsylvania, to the late Cleo and Alfred Brown.  Marilyn was raised by Sina Smith and grew up in South Philadelphia. She graduated from... View Obituary & Service Information

The family of Marilyn Jean Motley created this Life Tributes page to make it easy to share your memories.

Send flowers to the Motley family.