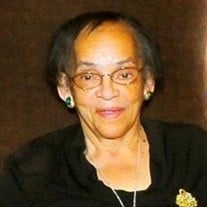 Margaret Marie (Reed) Washington, passed away on Saturday, December 4, 2021, in Dover, Delaware. She was born on October 18, 1931, to the late Edward Clayton and Mary Ella Reed, in Poughkeepsie, New York. Margaret was raised in Millbrook, New York, amongst her parents and two younger brothers, the late Edward “Junie” Reed (Barbara) and the late Robert “Bobbie” Reed (the late Bert). Margaret was a “social butterfly” who loved to sing, dance and draw. She was a woman of many attributes and lived life to the fullest! At the age of 19, Margaret met her late husband, Frank Washington. The first time Frank laid eyes on Margaret, he voiced, “The lady in that green dress is going to be my wife”! Within months, Margaret and Frank wed on January 20, 1951. Margaret and Frank had four daughters, the late Karen Thorpe, Deborah Wickliffe (Bill), Vivian Washington, and Theresa Harris (Marvin). Margaret and Frank settled in Ancramdale, New York, with their four young daughters. Family and friends built their first home, while Margaret loved to garden. She creatively arranged flower beds around their home, planting many types of colorful plants and flowers, that beautifully bloomed year after year. Margaret loved life and her family, especially her children, grandchildren, and great-grandchildren. Margaret and Frank, for most of their life, traveled by car at least once a year to visit all their children and grandchildren, until they were no longer able to do so. Frank would drive from New York to Virginia and Maryland to North Carolina to Georgia and back again to see all their children and grands and to attend their family reunions, while Margaret sat in the passenger seat barely able to see over the dashboard! She was a small woman by height but a powerful woman by heart and soul. Once, Margaret and Frank could no longer travel those distances, they relocated to Delaware to be near their daughters. Margaret leaves behind seven grandchildren, Anita (David), Kenny (Stephanie), Nicole, James (Nike), David, Charles and Tamara; sixteen great-grandchildren, Steven, Jaylen, Christina, Daniel, Mikenna, Jayden, Gabby, Mac, Tyler, Jaime, Jamison, Jaxson, Isaac, Devonte, Kayla and Caleb; and host of nieces, nephews, relatives and friends. Margaret leaves a legacy for her children and grandchildren to follow. “For the Lord shall be thine everlasting light, and days of thy mourning shall be ended” Isaiah 60:20

Margaret Marie (Reed) Washington, passed away on Saturday, December 4, 2021, in Dover, Delaware. She was born on October 18, 1931, to the late Edward Clayton and Mary Ella Reed, in Poughkeepsie, New York. Margaret was raised in Millbrook, New... View Obituary & Service Information

The family of Margaret M. Washington created this Life Tributes page to make it easy to share your memories.

Send flowers to the Washington family.