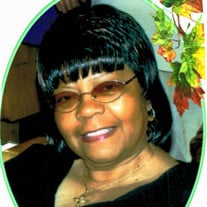 Margaret Virginia Bratten was born on January 16, 1940 to the late Burley Bratten, Sr. and Margie Douglas Bratten. She was known for her beautiful warm smile, kindness of ways and gentleness of spirit. Peacefully departing her life on Wednesday, November 10, 2021, surrounded by her loving siblings, they expressed their gratefulness to Peggie for her unselfish sacrifices. Not many would leave behind a husband and family in Illinois to move to Snow Hill, Maryland to lovingly care for their sister, but Peggie did just that and remained by her bedside throughout Margaret’s journey and transition. Margaret received her education through the Worcester County public school system at Snow Hill B on Ross Street. She was a graduate of the class of 1957 from “Old Worcester High.” At an early age, Margaret received Jesus Christ as her Savior at Mt. Zion Missionary Baptist Church under the leadership of the late Reverend John W. Woods, where she attended for many years. Since she enjoyed singing songs of praise, Margaret joined the Mt. Zion Mass Choir and the Mt. Zion Gospel Chorus. Out of many, three of her favorite songs of worship were “Ride Out The Storm”, “Going Up Yonder”, and “Take Me To The King.” Margaret married Manuel Williams and to this union there were four children. While living in New York for many years, Margaret was employed as a United States Postal Worker with over thirty years of service. After retirement and moving back to Snow Hill, Margaret was employed at Marshall’s department store in Ocean City, Maryland for many years, from where she retired for a second time. Cooking was one of Margaret’s hobbies. Her favorite saying while cooking was, “This is so tasty”, as she would twist her mouth to the side. Conversing with classmates was always welcomed and enjoyed whenever she would meet old friends. The card game Bid Whist was an escape to fun and laughter. Those left behind to cherish precious memories are: four children, Aaron (Karen) Williams, Sr. of New York, Diane Bratten of Wilmington, Delaware, Manuel (Anita) Williams, Jr. of Salisbury, Maryland and Gary Williams of New York; five grandchildren, Aaron Williams, Jr., Atavia Williams, Dayanna (Mike) Bratten, David Bratten and Shareef Jerry; nine great-grandchildren; three sisters, Dorothy Wise and Bessie “Peannie” Jenkins (Ernest), both of Snow Hill, Maryland and Peggie Mayfield (Wilmer) of Centreville, Illinois; two brothers, Burley (Margie) Bratten, Jr. of Salisbury, Maryland and Sylvester (Denise) Bratten of Ocean City, Maryland and a host of nieces, nephews and cousins of the Bratten and Douglas families as well as two special cousins, Eva Johnson and Edith Shockley. Preceding her in death were one brother, Leslie Douglas and two nephews, Darrin Bratten and Kenneth Mayfield.

Margaret Virginia Bratten was born on January 16, 1940 to the late Burley Bratten, Sr. and Margie Douglas Bratten. She was known for her beautiful warm smile, kindness of ways and gentleness of spirit. Peacefully departing her life on Wednesday,... View Obituary & Service Information

The family of Margaret Virginia Bratten created this Life Tributes page to make it easy to share your memories.

Send flowers to the Bratten family.