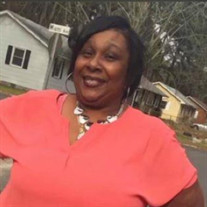 Mable’s Journey... Mable Elizabeth Horsey, a resident of Salisbury, Maryland, transitioned peacefully to heaven at the age fifty-three (53) on Friday September 17, 2021, at Tidal Health Peninsula Regional Hospital in Salisbury, Maryland. She was born on July 24, 1968 to Alethia Basnight and the late Douglas Spruill in Edenton, North Carolina. Mable received her formal education in the Tyrrell County public school system. Her early Christian Education began in Gum Neck, North Carolina, at Agape Christian Center. She was a hard worker who provided for her family. Mable often worked multiple jobs to ensure that she gave her children and grandchildren everything they wanted. At Christmas time, her living room was filled from floor to ceiling with gifts. Mable loved her children and grandchildren tremendously. She coined the phrase, “Map Plus Eight,” because she had eight children. Mable enjoyed spending time with her family, traveling, shopping, and listening to Old School music. Mable, or Madea as she was affectionately called by all who knew and loved her, was a mother to many of her extended family and friends. She opened her home and her heart to many neighborhood children. She possessed a nurturing spirit and although she disciplined with love, Madea didn't hold any punches when it came to telling it like it was. A dedicated employee, Mable enjoyed her job. At the time of her demise, she was a Home Health Aide, but was previously employed by the State of Maryland for twenty years as a Caregiver. Her earliest employment was that of a security guard with Top Flight Security. Mable built many friendships and relationships with fellow co-workers and clients. She was well-liked and a person on whom you could depend. Whenever or whatever was needed of Mable, she didn’t think twice; but smiled and made it happen! Those cherishing her loving memories, in addition to her mother, Alethia (Edward) Croswell are: her children, Shamicka and Jaden Basnight, Bryant, Jr., Deirdre, Sharron and Ryanta Horsey, Jasiah Basnight Johnson and Dynetta (Tawanda); two special daughters, Ariz Wright and Waynesha Roberts, and two step-children, Turez Blake and Jocelyn Horsey; her grandchildren, Khamir Collins, Jasir, Jaeonna, Jhaziah, Jhani, Jhaze and Jhalee Horsey, Egypt and Eli Tate, Kharon Finney, Jamai Wheatley, Ahmies and Ah’Zeym Roberts; two sisters, Stephanie Gibbs McNair and LaTasha Spruill; one brother, Douglas (Malika) Spruill; four uncles; four aunts; her grandfather, James “Granddaddy” Basnight; brother-in-law, Reverend Gary (Sharon) Horsey; sisters-in-law, Oleanna Smith, Lovie and Patsy Horsey and Dorothy (Michael) Brooks, and a host of god children, nieces, nephews, cousins and other extended family and friends. Mable was preceded in death by a step-daughter, Stacy Horsey, a grandson, Jy’Zhir “Boss” Horsey, a sister, Sharon McPhail and grandmother, Laura Basnight. “It broke our hearts the day you went away, but we’ll always remember the joy you gave to us one and all.” Sorrowfully Submitted ~ The Family

The family of Mable Elizabeth Horsey created this Life Tributes page to make it easy to share your memories.

Send flowers to the Horsey family.