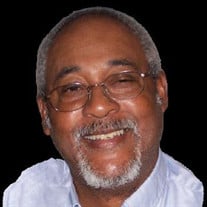 Luke J. Harris, Jr. of Dover, Delaware, went home to be with the Lord Saturday, September 18, 2021. He was 76 years old. Luke was born in Nansemond County, Virginia (currently known as Suffolk, VA) on July 16, 1945, to the late Luke J. Harris, Sr. and Harriet Bagley Harris. Growing up, Luke spent most of his summers in Philadelphia with his Aunt Mabel and Uncle Joseph Taylor. After the loss of his father, Luke moved in with is aunt & uncle and finished his schooling in Philadelphia, Pennsylvania. In 1965 Luke joined the United States Air Force. Soon after in 1966, Luke met Miriam Celestine Spellman and they were married in 1967, in Ellendale, Delaware. From this union four sons were born. During his time in the Air Force the family was stationed at Dover AFB in Delaware, McGuire AFB in New Jersey and Yokota AFB in Japan. In 1974, Luke and his family returned to Dover AFB, where he finished out his military career. Luke retired from the Air Force in 1985 as a Master Sergeant, after 20 years of service. Luke gave his life to Christ after returning from Japan and joined New Shiloh FBH Church, where he later became a deacon. After retiring from the USAF, Luke started his own business as an auto mechanic. God saw fit to bless this venture and Luke transitioned his business into a tow company - Harris Towing Service - becoming the FIRST (and for a long time the ONLY) Black owned tow company in the state of Delaware. All four of his sons worked with their father at some point and time and were trained in the towing business. In 2009, Luke retired from his business and handed over the reins to his eldest son. The business is still operational to this day and known as Harris Towing Group. In addition to his parents, Luke was preceded in death by his sister, Clara Boone and his brother, Randy Harris. Luke was a wonderful husband and the best father, grandfather, great-grandfather, and uncle. He leaves to cherish his memory, his wife of 54 years, Rev. Miriam Celestine Harris; sons, Jonathan (Syreeta), Michael (Carla), Joseph (Melisha) and Luke Anthony; sisters, Mary Best and Dorothy Harris; brothers, John Harris and Wesley Harris; 11 grandchildren; 10 great-grandchildren; one aunt; and a host of nieces, nephews, cousins and his church family at New Shiloh.

The family of Luke J. Harris Jr. created this Life Tributes page to make it easy to share your memories.

Send flowers to the Harris family.