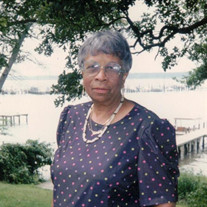 Lucy Allen was born on May 14, 1925, to the late James and Lucy Drayton, in Savannah, Georgia. She was the second born child. She had one brother, James Drayton, Sr. Lucy attended Beach High School in Savannah, Georgia, and then attended South Carolina State University. After graduation, she moved to Philadelphia, Pennsylvania, where she attended Embalming School. She drove one of the first trollies in Philadelphia. Lucy received her Real Estate License in 1958, and worked for a realtor company. She was later employed at the Philadelphia Housing Devolvement Company, where she was head of the sales department for Rehab Homes. Lucy married Lawrence Allen. They relocated to Delaware where Lucy continued her employment as a realtor and eventually opened her own business. She was a member of the National Association of Realtors. Lucy turned in her real estate license at the age of 85, due to health issues. Lucy joined St. George Chapel Episcopal more than 20 years ago. She was very active member in the church and the community. She was employed by the State of Delaware Community Action. She served her church and community and was loved by so many. In addition to her community affiliations, Lucy was also employed as a Lady Attendant for Bennie Smith Funeral Home. In addition to her parents, Lucy was preceded in death by her husband, Lawrence Allen; brother, James Drayton; and grandson, Spencer Evans. Lucy leaves to cherish her memories, three children, Jennie Braxton of Millsboro, DE, Marita Allen of Anchorage, AK and Lawrence Allen, Jr., of Williamsport, PA; seven grandchildren; several great-grandchildren; niece, Jacquelin Williams of Lawrenceville, GA; nephew, James Drayton III of Orlando, FL; and special friends, Ada McNair, Alexan Williams, Thenia Brasby, Lucille Wright, Pauline Johnson, Sylvester and Stuart Harmon.

The family of Lucy Allen created this Life Tributes page to make it easy to share your memories.

Send flowers to the Allen family.