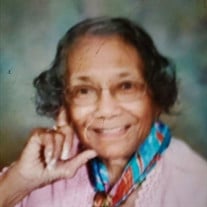 Louise M. Gatewood, was called home to be with the Lord, on Sunday January 9, 2022, at the age of 93. Louise was born November 7, 1930, in Dothan, Alabama, to the late Jesse & Rachael Mitchell. In search of a better living for his family, Jessie moved to Pennsylvania, then New York before settling in Preston, Maryland, along with her sister, Anna Lois Adams. Louise was educated in the Caroline County School System. Sister, as she was known by many, married Charles W. Holland, Sr. From this union they had three children, Dorothy, Eloise and Charles Jr. With her second marriage to Robert B. Gatewood, Sr., she had one child, Robert Jr. Louise had a real passion for always helping anyone in need. She took in many foster children and became a caregiver until her retirement. She loved cooking and having big barbecues at her house. All were welcomed. Louise was a hard worker, setting a great example for her family. Short in stature, Louise said what she meant and meant what she said. Louise loved the LORD, and raised her family to do the same. Gospel songs were always playing in her vehicles and at her house 24 hours a day. Sister was family oriented. She spent many holidays together with her family, enjoying dinners and laughs together. Sister sat in her chair, quietly observing, making sure everyone ate, and had plenty to take with them as they walked out the door. Louise also enjoyed spending time with her church family. They often traveled to different churches, praising the Lord every Sunday, and stopping at her favorite restaurant for dinner afterwards. Louise would open up her house so they could have Bible studies or just prayer and worship. Phone calls of prayer would be heard at night before turning in once Louise's health began to fail from the Pastor or other church members. Louise leaves to cherish her memories: two children, Dorothy Brice and Robert Gatewood Jr.; three grandchildren, Kenneth Brice, Jr, Charlene Brice and Alyssia Smith; seven great-grandchildren, Cierra Norton (Demitrius), Danaya Schurter (Benjamin), Xavier & Shaniya Frieson, Jaelin Moaney, Isaiah & Samara Potter, and Phillip Moaney, whom Sister always treated as her own son; along with a niece Joyce Wright (Jerry); and a host of other loving family members. Sister was preceded in death by both parents; sister, AnnaLois Adams; daughter, Eloise Murray; son, Charles W. Holland, Jr.; nephew, Jerome Adams; and grand-daughter-in-law, Deborah Lambert-Brice. Louise will be missed by all who knew her well, especially by her family.

Louise M. Gatewood, was called home to be with the Lord, on Sunday January 9, 2022, at the age of 93. Louise was born November 7, 1930, in Dothan, Alabama, to the late Jesse & Rachael Mitchell. In search of a better living for his family,... View Obituary & Service Information

The family of Louise Gatewood created this Life Tributes page to make it easy to share your memories.

Louise M. Gatewood, was called home to be with the Lord, on Sunday...

Send flowers to the Gatewood family.