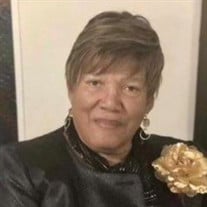 LENORA’S LIFE AND LEGACY The life of Lenora Winifred Timmons Harrell “Nana” did not come to an end with her transition on Thursday, February 3, 2022, at the age of eighty-four (84). She was surrounded by loved ones who will honor her and embody the best of her legacy in their lives. Lenora made her entrance into this earthly realm on May 8, 1937, in Pocomoke City, Maryland. She was the daughter of the late Raymond Anthony Timmons and Nevada Idina Timmons. The family included seven girls, Naomi, Gwendolyn, Helen Marie, Gladys, Beulah, Phyllis and one brother, Raymond Anthony, Jr. Lenora was the 6th girl in this loving family of eight children. Naomi, Gwendolyn, and Raymond Anthony, Jr. preceded her in death. The Timmons family was well-respected and influential in the local community. They loved people so neighbors and friends were often treated like family members. During most holidays in the Timmons’ home, extended family members, church members, friends and neighbors were present. In her own life, Lenora’s early home dynamic would influence her. Throughout her adult life, she never hesitated to open her home to friends or extended family members to stay for a quick visit, months, or even years. Nana had an uncanny ability to create connections with pretty much everyone she met. Lenora had an incredible love of learning that extended from her elementary and high school education in the Worcester County school system. After high school she attended the Philadelphia School of Practical Nursing. When she completed her Nursing degree, she returned to Maryland to attend the University of Maryland Eastern Shore in Princess Anne, Maryland. While there, she pledged Alpha Kappa Alpha Sorority Incorporated in 1960. In 1963, Lenora married Lewis Quentin Harrell in Shiloh United Methodist Church in Pocomoke City, Maryland. They later moved to Brooklyn, New York where they expanded and raised their family which included three daughters, Tonya, Ramona, and Tina. While in New York, Lenora was employed by Manufacturers Hanover Trust Company as a financial coordinator. She retired from Manufacturers Hanover/Chase Bank in 1993. Lenora was a woman of great faith and she demonstrated that faith through her commitments in her church homes. During her time in New York, her church homes included Brown Memorial Baptist Church and Williamsburg Christian Church. Shiloh United Methodist Church remains her church home in Maryland. In each house of worship, she applied her natural gifts for organization, math and finance by serving on finance and treasury committees. Other past offices and committees included: Secretary of United Methodist Women, Member of the Culinary, Sunday School, Vacation Bible School, and the Pastor Parish Relations Committees. Lenora was also the National and Local Treasurer of the Stephen Long Guild Incorporated. Her commitment to service and giving also extended to the community. She served as the Chairperson and Representative for CONAM (Committee on Native American Ministries). She was connected to the Accohannock Native American Tribe under the direction of Chief Tyler. Her Native name was appropriately “Loving Spirit Woman.” She also volunteered with Relay for Life and local Voter Registration efforts. A quintessential lady, devoted mother, loving sister, and loyal friend, she leaves behind: her sisters, Helen Marie, Gladys, Beulah, and Phyllis; her daughters, Tonya, Ramona, Tina and parallel daughter, Mary Joseph Speller; sons-in-law, Derek Johnson, Richard Gibbs and Charles Blake; grandchildren, Asha Gibbs, Jada Cheek, Anthony Gibbs, Jessica Johnson and Dominique Blake; spiritual daughter Deborah Tull, as well as a host of nieces, nephews, loved ones and friends. SUBMITTED WITH LOVE ~ THE FAMILY

LENORA&#8217;S LIFE AND LEGACY The life of Lenora Winifred Timmons Harrell &#8220;Nana&#8221; did not come to an end with her transition on Thursday, February 3, 2022, at the age of eighty-four (84). She was surrounded by loved ones who will... View Obituary & Service Information

The family of Lenora Winifred Harrell created this Life Tributes page to make it easy to share your memories.

The life of Lenora Winifred Timmons...

Send flowers to the Harrell family.