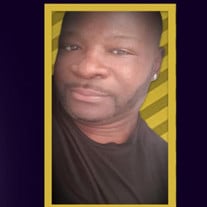 KEVIN’S JOURNEY… KEVIN JERRELL STURGIS, a resident of Fruitland, Maryland was born on Tuesday, December 1, 1970 to the late Betty Wright and Larry Sturgis. At 12:05 am on Friday, November 5, 2021, surrounded by his wife and children, God sent His angels to welcome Kevin home for his eternal rest. At an early age, Kevin received his formal education in the public schools of Wicomico County and was a graduate of James M. Bennett Senior High School. Kevin later moved to Salisbury, MD where he met his wife and they created their life and loving family. Kevin loved going to church with his family. He received his spiritual training and direction under the leadership of Pastor Shernita Boyd of Pathway to Life Church in Salisbury, MD. Kevin was employed for many years as a construction worker by trade at Evans Builders of Salisbury, MD until his health began to fail him in 2020. During his employment with Evans Builders, Kevin gained many lifelong friends. Kevin was a humble, fun-loving guy. He was known for his fine taste in jewelry, expensive cars and trucks, and definitely his dogs, Polo and Nyla. Kevin took pride in spending time with his wife, children and grandson. He loved traveling, taking vacations with his friends and more recently, taking road trips to Williamsburg, VA. Kevin's hobbies consisted of cooking, fishing, riding motorcycles with his boys, going to the casinos, listening to music, and watching football. His favorite team was the Baltimore Ravens. Kevin will be greatly missed. He leaves behind to cherish precious memories: his devoted wife of fifteen (15) years, Tiarika Sturgis of Salisbury, MD; six children, Brittany Jackson of Princess Anne, MD, Kleshae Sturgis of Hanover, MD, Kevin, Aamiyah, Tyreke and Kevasia Sturgis, all of Salisbury, MD and his grandson, Jace Elder of Princess Anne, MD. Kevin is survived by his father, Larry Sturgis of Salisbury, MD; two aunts, Reverend Ernestine Jones and Alvera Stewart and uncle, Leonard Waters, Jr., all of Salisbury, MD; brother, James Pierce and two sisters, Gloria Sturgis and Daphne Sturgis, all of Baltimore, MD; a special devoted cousin whom Kevin often referred to as his sister, Michele Jones-Armstrong; a special devoted brother-in-law, Deangelo Stone, and a host of lifelong friends who were more like brothers, in addition to cousins, nieces, nephews and extended family and friends. Kevin was preceded in death by his loving mother, Betty Wright in 2017 and four sisters, Shawanda, Angel, Donna and Melissa Sturgis. He was also preceded in death by maternal grandparents, Shirley Wright and James Cannon and paternal grandparents, Rebecca Berry and Wilbert Cornish. Lovingly Submitted ~ The Family

KEVIN&#8217;S JOURNEY&#8230; KEVIN JERRELL STURGIS, a resident of Fruitland, Maryland was born on Tuesday, December 1, 1970 to the late Betty Wright and Larry Sturgis. At 12:05 am on Friday, November 5, 2021, surrounded by his wife and children,... View Obituary & Service Information

The family of Kevin Jerrell Sturgis created this Life Tributes page to make it easy to share your memories.

Send flowers to the Sturgis family.