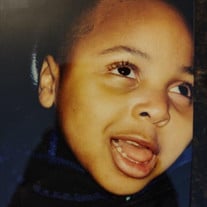 JUWAN’S JOURNEY... Juwan Calvin Leak, a resident of Easton, MD, departed this life at the age of twenty-six (26) on Tuesday, January 4, 2022. Juwan was born in Cambridge, MD, on February 17, 1995, to Towanda Jackson-Tolliver and Calvin Leak, Jr. He attended Caroline County and Talbot County Public Schools. Juwan was an inspiration to so many people. From his warm, beautiful, contagious smile to the enormous amount of strength he had, Juwan touched the lives of anyone who met him. Seeing him smile could light up a room and instantly lift your spirits. When he smiled, you couldn’t help but smile too. He was a fighter and had the strength of a Lion. So many times, doctors had counted him out, but he never gave up. He always came out stronger than ever. He was defying any of the odds that had been stacked against him. Juwan loved watching TV and being in his nice, comfy bed, but the highlight of his week was spending the weekends with his Mom-Mom, and Pop-Pop Leak. (They had him SPOILED ROTTEN). But for some unknown reason, he did not want to go to sleep while he was there. He would stay up for hours, come home and sleep for hours trying to make up for the weekend. No one could figure out how or why he did that, but anyone who knew Juwan knew he would do whatever he wanted when he wanted. Juwan leaves to cherish beautiful and lasting memories of his life: his loving mother, Towanda Tolliver (Emmett, Jr.); father, Calvin Leak, Jr. (LaTasha); godmother, Charmaine Elliott; godfather, Albert Thomas; sisters, Jada Leak and Emoni Tolliver; grandparents, Betty Leak (Calvin, Sr.); grandmothers, Nancy Jackson (Michael Briggs) and Sandra Caldwell (Norwood); grandfathers, Thomas Batson and Emmett Tolliver, Sr. (Lisa) great grandmother, Lillian Holmes; great grandfathers, Keifford Jackson and William Cephas; aunts, Gail Murray (Antonio), Pam Murray, Farrah Benson, Kisha Brown, Cheree Brown, Kinya Blake (Julian) and Tiera Hurst; uncles, Calvin Wilcox, Louis Flamer, Eric LaRue, Jeffrey Butler, Jr. and Deryl Butler; one niece, Laila Hammond and a host of other family and friends. Juwan was preceded in death by his great grandparents, Robert Lee Blackmon (Jessie Mae) and Wesley Friend (Alvalee), great grandmothers, Dora Jackson and Essie Cephas, aunt, Teresa Leak-Warner and other family members as well. LOVINGLY SUBMITTED ~ THE FAMILY

The family of Juwan Leak created this Life Tributes page to make it easy to share your memories.

Send flowers to the Leak family.