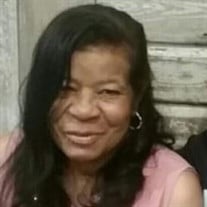 Let's take a moment to tell you about the life of Judy B. Stanley. It is a life that should be celebrated as one filled with LOVE and laughter. Beloved Judy departed this life on August 14, 2021. Judy graced this earth on September 8, 1955, in the Caribbean Island of Trinidad, born to the late Roderick and Una Padia. Her early education began in Trinidad. Then she immigrated to the United States to further her education and earned an Associate’s Degree in Administration at Medgar Evers College. As Judy was adjusting to the New York lifestyle, she met Kenneth Stanley in 1978, at a house party of a mutual couple, in the Bronx, New York. There was an instant connection. They only dated for a year before they were married. On August 16, 1980, she became a devoted and loyal wife. She worked in Retail on 1 Exchange Place in New York City between late 1970 - 1980. The first child, Nicole, was born in Brooklyn, New York. After the birth of Nicole, they decided to move the family to Delaware where the second child, Kenneth Stanley, Jr. was born. While raising a family she changed her career and worked at Vlasic and eventually retired after more than 20 years of dedicated service. During her retirement Judy enjoyed traveling, interior design, crafts, event planning and spending time with her lovely grandchildren. She will be remembered for her warm smile, contagious laugh, welcoming ways and the love of new food adventures along with being the black Martha Stewart of the family. She will be truly missed. Judy was preceded in death by her parents, Roderick Padia and Una Padia; brothers, Rawlins, Lennox, Owin and sister, Gloria. Judy leaves to cherish her memory, her husband of more than 40 years, Kenneth Stanley, Sr.; children, Nicole (Michael), Kenneth Jr.; other daughters, Jenelle (Arnoldo), Sarah; godson, Jameal; loving grandchildren, Ariella, Alexander, Eden, McKenna and Ayanna; sisters, Veronica (Trevor) and Margaret (Garth); special cousin, Linda (whose relationship was known as soap and towel); in-laws, Cynthia, Cleophas, Sharon (Keith), Craig (Nancy), Gregory (Martella), Carollee (Tom); and a host of nieces and nephews, along with loving friends whom became family. What a legacy, what a life. I invite each of you to keep Judy alive in your hearts. We were each touched by her presence and better because of that. Thank you for being here and making Judy's life so meaningful. Also please take comfort in knowing the Lord honored her request and gave her rest as the scripture is written Luke 1:45 " BLESSED is she who has believed that the Lord would fulfill HIS promises to her".

Let's take a moment to tell you about the life of Judy B. Stanley. It is a life that should be celebrated as one filled with LOVE and laughter. Beloved Judy departed this life on August 14, 2021. Judy graced this earth on September... View Obituary & Service Information

The family of Judy B. Stanley created this Life Tributes page to make it easy to share your memories.

Send flowers to the Stanley family.