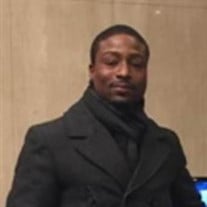 Jonathan Antonio Downing Jr. was born to Tanya U. Ollison and Jonathan Antonio Downing, Sr. on October 7, 1984. He was born in the historical Lewes, Delaware, although he was raised in a small community in North Carolina outside of the Marine Corps Air Station (MCAS) Cherry point, named Harlowe. He received his primary education in North Carolina, he attended both Cape Henlopen Highschool from 2000 – 2001, and graduated from Havelock High School in Havelock , North Carolina in 2004. He was an undergraduate of Colorado Technical University where he successfully graduated with an Associate of Science in Business Administration. Jonathan was known as (Jon Jon) to his family and close friends, he was a sweet soul, and devoted brother to his siblings. He was a faithful member of the Philadelphia Pentecostal Holiness Church in Ellendale, DE under Bishop Foster. Jonathan (Jon Jon) was an accomplished author, in which his journey in writing began in 2006 when one of his professors was marveled by one of his writing assignments. It was then that Jonathan (Jon Jon) realized his talent and pathed out to share his writings with the world. His accomplished published book is “The Pursuit of Vengeance”. Jonathan enjoyed spending his off time in nature and traveling. Jonathan (Jon Jon ) is survived by his mother Tanya U. Ollison of York Haven, PA, his father Jonathan Antonio Downing Sr., his son Jayon Downing, his oldest brother William L. Benson of Melville, NY, brother DeRyan J. George of York Haven, PA, younger sister DeAsiah George of York Haven, PA, two stepbrothers Levern Lee of Lincoln, DE, Melvin Davis of Milton, DE Robert Ollison Jr. (Katrina) of Mechanicsburg, PA and stepsister Demetrius Davis of Felton, DE, , his grandmother Dolena Bowden of Milton, DE and a host of aunts, uncles, nieces, nephews, cousins and friends.

The family of Jonathan Antonio Downing Jr. created this Life Tributes page to make it easy to share your memories.

Jonathan Antonio Downing Jr. was born to Tanya U. Ollison and...

Send flowers to the Downing family.