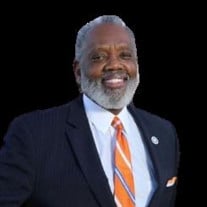 Dr. John Leon Graham was born on July 5, 1964, in Baltimore, MD the son Nancy Jackson Hill and John Leon Graham. Having lost his parents at the age of 6, he and his siblings relocated to Harlem, NY where he was raised by his aunt and uncle Martha... View Obituary & Service Information

The family of Dr. John Leon Graham created this Life Tributes page to make it easy to share your memories.

Send flowers to the Graham family.