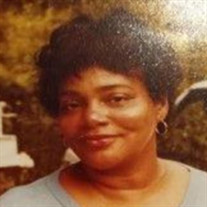 JEWEL ROSEBUD MITCHELL Jewel Rosebud Mitchell, a resident of Salisbury, Maryland, entered into glory on Tuesday, November 23, 2021 at Anchorage Nursing Home in Salisbury, Maryland at the age of eighty-two (82). Mrs. Mitchell was born July 14, 1939, in Augusta, GA and grew up in Philadelphia, PA. She was one of five children born to the late Robert and Freddie Mae Butler. She was the beloved wife of her surviving husband, Arthur Nelson Mitchell, Sr. Young Jewel attended Fitzsimons Thomas High School in Philadelphia before her family journeyed to Newark, New Jersey in the late 1950’s. During her youth, a quiet and shy young woman, she loved having picnics in the park with her sisters and little brother, and often ventured to various amusement parks. She met the love of her life shortly after landing in Newark, New Jersey; a musician in the making who swept her off her feet at first sight. She was lured in by the sultry jazz sounds coming from this young guitarist, Sonny Boy. Mrs. Mitchell continued her life journey to Wetipquin, Maryland where she always had an interest in sewing and she fantasized about pursuing a career as a seamstress. Jewel Rosebud often made clothing for her children and seeing her girls in the attire made by her own hands brought much joy to her and her happy youngsters. Additionally, she was sought out to design and make summer clothes for children in the community. Jewel was ultimately designed by God to be the mother of seven children and the mother to many. She was a nurturer who loved working with children and earned several certificates in Early Childhood Education. She was remembered for investing a lot of time working at a community daycare center where a great number of children considered her “mom, Aunt Jewel, and mom mom.” It was evident to all that Mrs. Jewel Rosebud loved her children and most importantly, she loved caring for them. Mrs. Jewel spent many years receiving spiritual teaching and preaching from televangelist, the late Oral Roberts. Her kindness and character were evident by what she learned and applied to her life. Additionally, Mrs. Mitchell loved cooking and has left the blueprint of her signature potato salad, fried chicken, and stuffing, which you will find on the dinner table of her daughters at Thanksgiving and Christmas. Survivors include: all of her seven children, Linda M. Armistead of Florence, AZ, Arthur N. Mitchell Jr. of Hyattsville, MD, Darren K. Mitchell (Beatrice) of Myrtle Beach, SC, Darlene M. Kelly (Eric) of Salisbury, MD, Terrance W. Mitchell, Sr. (Terri) of Newport News, VA, Ivy C. Mitchell of Salisbury, MD and Valerie D. Greek (Leonard) of Winchester, VA; her oldest sister, Gwendolyn Butler of Atlanta, GA and only brother, Fred Butler, Sr. (Siloan Yar) of San Francisco, CA; grandchildren, Marlon Joynes, Jason Joynes, Norman Savage, Terrance Mitchell, Jr., Taisa Mitchell, Brandon Townsend, William Hazzard, Jr., Gwen Mitchell, Eric Kelly and Erica Kelly; seven great grandchildren and a host of nephews and nieces. In addition, she was preceded in death by two siblings, Barbara Tucker and Gloria Elliott.

The family of Jewel Rosebud Mitchell created this Life Tributes page to make it easy to share your memories.

Jewel Rosebud Mitchell, a resident of...

Send flowers to the Mitchell family.