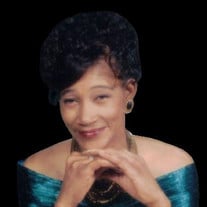 Jean Olivette Louise Showell, was born on November 1, 1947, to the late James William Showell and Mary Kathryn Hood, in Laurel, Delaware.  She was 73 years old when she transitioned into eternal rest on September 30, 2021, at the Genesis Seaford... View Obituary & Service Information

The family of Jean Showell created this Life Tributes page to make it easy to share your memories.

Send flowers to the Showell family.