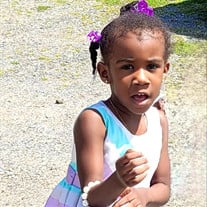 Jazmyn Amber Clinton, or “Jazzy” as she was affectionately called, made her debut into the world on the night of September 7, 2017, in Dover, Delaware, to proud parents, Marcel and Myreschelle Clinton. She was the first of twins to be born into this family and in typical Jazmyn fashion, she was in a rush to get here. Not only were they born weeks early, but Jazzy was born two minutes and six seconds before her twin sister, Draeya. Jazzy had an abundance of energy, a beautiful smile and a glint in her eye, which hinted at her mischievous side. Jazzy was a vibrant, spirited child who was always on the move. We like to say Jazmyn was an action verb because of her inability to sit still. From running around for hours, to making the living room her personal obstacle course or simply watching TV upside down, she was always doing something. Jazmyn loved her siblings, her iPad, her parents and her grandma- in that order. If she wasn’t climbing or swinging from something, you could expect to see her with a tablet, phone or some other electronic device. She could also be very sweet at times, and would change your mood with a rare smile or a random kiss when you least expected it. Unpredictable, is the word that comes to mind when describing her. Our world fell apart when Jazmyn was diagnosed with terminal brain cancer in August of 2021, and was given two months to live. She was just three years old at the time but typical Jazmyn and by the Grace of God, she went well past the doctors’ expectations. She endured numerous brain surgeries, chemotherapy/ radiation and several months in the hospital. This strong and brave little girl lying here today fought a long and hard battle before being called to rest by our Lord on January 19, 2022, while in her mother’s arms. She was only four years old. Jazmyn leaves to mourn her passing, her parents; her older sister and favorite person in the world, Chanelle Renee; twin sister, Draeya Nicole; grandmother, Myononway Nimely Sherman; and host of aunties, uncles, cousins and loved ones. Though her time with us was brief, Jazmyn was a blessing to all who encountered her and touched the lives of many. She was loved by those around her and will forever remain in our hearts.

Jazmyn Amber Clinton, or &#8220;Jazzy&#8221; as she was affectionately called, made her debut into the world on the night of September 7, 2017, in Dover, Delaware, to proud parents, Marcel and Myreschelle Clinton. She was the first of twins... View Obituary & Service Information

The family of Jazmyn Amber Clinton created this Life Tributes page to make it easy to share your memories.

Jazmyn Amber Clinton, or “Jazzy” as she was affectionately called,...

Send flowers to the Clinton family.