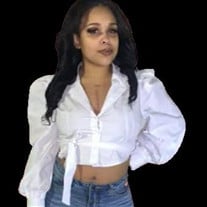 Jay’d’s Journey Jay’d Bright, a resident of Pocomoke, Maryland was born on Tuesday, June 26, 2001 to Carlisa Ginn and James Bright, Jr. She departed this life on Friday, December 3, 2021 at Johns Hopkins Hospital in Baltimore, Maryland surrounded by her family and loved ones. Jay’d attended Pocomoke High School where she was a member of the choir, band front and cheerleading team. She graduated in June of 2019 and began her next chapter at Morgan State University in August of the same year to pursue a nursing career. While there, she also received her certification as a medical technician. In addition, Jay’d was an entrepreneur and stylist in every sense of the word. From eyelashes to hair, she mastered “flawless” with each of them and was sure to please her clients. Her tenacity in pursuit of her goals allowed her to achieve each one of them. She was ambitious and focused, never allowing any distractions or setbacks to prevent her from achieving the goals she set for herself. Jay’d undeniably lived up to her name, a bright ray of light touching everyone she knew. She was selected as a 2017 recipient of the Make A Wish Foundation which afforded her and her family a dream vacation to Disney World. She was also selected as a member of the Maryland Promise Program, an honor that exemplified her academic success and leadership skills. To know Jay’d was to truly love her. Jay’d leaves to cherish loving memories: her mother, Carlisa Ginn of Pocomoke; her father, James Bright, Jr. of Baltimore; one brother, Malik Rhock-Ginn of Arizona; three sisters, Jayla Bright, Jazmin Bright, and Si’Ara Hamilton, all of Pocomoke; two grandmothers, Juanita Deshields of Fruitland, Grandmom Peggy of Baltimore; one great grandmother, Mabel Caroll of Baltimore; five aunts, Danae Quailes of Cambridge; Aunt Teeny, Aunt Tia, Aunt Moe, and Aunt Bill all of Baltimore; two uncles, Stephen Jones of Kentucky and Eric Cropper of Colorado; two special friends, Destiney Melendez and Jaden Cropper, both of Pocomoke and a host of other relatives and friends. Jay’d was preceded in death by two grandfathers, Michael Ginn and Clinton Vincent, two great grandmothers, Margaret Ginn and Lettie Deshields and two great grandfathers, Lawrence Ginn and Edward Deshields. Lovingly Submitted - The Family

The family of Jayd Endya Bright created this Life Tributes page to make it easy to share your memories.

Send flowers to the Bright family.