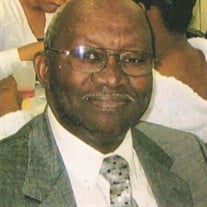 James Rollo Jones Jr., a native of Allen, Maryland, affectionately known as Brother, Uncle Buck, and Jimmy, departed this life on Friday May 6th at Costal Hospice on the Lake. He was born July 7th, 1936, to the proud parents of James Rollo Sr. and Gladys Elizabeth Jones of Allen, Maryland. He was eighty-four years old. James was reared in a large, loving, spiritual home as the second oldest of 8 children. James received the first six years of his formal education in a two-room school in Allen, Maryland known as the Allen Community Center. Mrs. Mary Gladys Jones was both his principal and teacher during this time. After completion of his elementary years (grades 1-6) he was bussed to Salisbury Colored High School in Salisbury, Maryland, where he completed his formal education and was graduated in the class of 1955. His greatest desire was to travel and see the world; and his serving in the United States Navy provided him the opportunity to do just that. He received his basic training at the United States Naval Training Center Bainbridge in Port Deposit, Maryland. After graduating from basic training school, he was assigned to a ship named the USS Ross DD563. He remained there as the boiler operator until he was honorably discharged in 1958. After having been discharged from the United States Navy he still had the desire to continue being productive, so he attended University Maryland Eastern Shore (UMES) for one semester majoring in woodworking under the strict supervision of Mr. James A. Sullivan. His favorite accomplishment from this experience was the construction of an S shaped table which is still in our home today and is admired by many who have visited with us. He also attended Barbering School and learned how to cut hair. James joined Friendship United Methodist Church at an early age. He enjoyed working in the church and was always ready to lend a helping hand whenever and wherever he could. You could always find him in the kitchen when the men had their famous Wild Game Dinner. You could hear him saying “I can’t cook, but I can keep the pots and pans cleaned”. He did this until his health began to fail. James served on many boards. He was a faithful member of the United Methodist Men, the Men’s Gospel Choir, the Board of Trustees, the Finance Committee, and the Nominating Committee. He was also a life member of Lamech Lodge number 30 where he served for 50+ years. James always put his heart and soul in each organization on which he served. He was not afraid to express his opinion about a topic being discussed if he was not in agreement with it. He felt that the back pew, on the right-side in the Sanctuary, belonged to him. Being a lover of good gospel music, he could be seen on this pew clapping his hands, tapping his feet, and singing along with the choir. His hobbies included watching football, basketball, baseball, old western movies, doing word search puzzles, attending family gatherings, grilling, and listening to our wonderful, outstanding pastor, Rev. Sheneatta Whittington who preached every Sunday morning. James was employed by Dresser Industries, formerly known as Wayne Pump, for 33 years, where he received may honors during his employment. He traveled to various places being the spokesperson for Dresser Wayne, explaining how the gasoline pumps were made and the operation of them. This was the highlight of his career. He leaves to mourn, his loving, caring, devoted wife Doris P Jones of 58 years, one daughter Charleita Lynette Jones, one grand-daughter Amber Denise Jones of Laurel, Maryland. They were the “Apple of His Eye” and a dedicated father and grandfather. He also leaves three brothers: Marion (Martha) Baltimore, Maryland, Wallace (Joan) New Castle, Delaware, Otto (Terry) Columbia, South Carolina, two sisters: Shelby Barkley Lincoln, Delaware, Lottie Thompson Glen Burnie, Maryland. He also leaves a host of nieces, nephews, cousins, and friends. He was preceded in death by his parents James Rollo Sr, and Gladys Elizabeth Jones, four sisters Alexine Cornish, Ella Mae Nichols, Henrietta Cook, and Accola Horsey.

James Rollo Jones Jr., a native of Allen, Maryland, affectionately known as Brother, Uncle Buck, and Jimmy, departed this life on Friday May 6th at Costal Hospice on the Lake. He was born July 7th, 1936, to the proud parents of James Rollo Sr.... View Obituary & Service Information

The family of James Rollo Jones Jr. created this Life Tributes page to make it easy to share your memories.