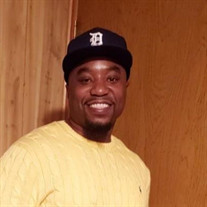 Jamaal’s Life and Legacy Jamaal Frances Taylor, a resident of Crisfield, Maryland, was born on August 17, 1984. He was the son of Lily Cecelia Taylor and the late Leroy Sidney Taylor, Sr. He unexpectedly departed his earthly life at the age of thirty-seven (37) on Friday, February 25, 2022 at home. Jamaal or “Mal” as he was called by those close to him, attended Crisfield High School in Crisfield, Maryland. He worked in the Seafood Industry for Glenwood Evans and Southern Connection. He then began work in the production industry for Perdue, where he worked until his untimely demise. Mal loved playing basketball, spending time with family, play fighting with his kids, eating and laughing. Mal had the brightest and prettiest smile and biggest laugh. He was known for always smiling. Every time you saw him, he had the biggest and brightest smile on his face. Jamaal leaves to cherish fond memories: his mother, Lily Taylor of Smyrna, DE; grandparents, Oscar and Ella Mack of Princess Anne, MD; brother, Leroy Taylor, Jr. of Smyrna, DE; two sisters, (his twin sister) Shamarla (Kwesi) Thomas of New Castle, DE and Taijah Taylor-Sledge of Salisbury, MD; two daughters, Jakayla and Jalaiah Taylor, both of Princess Anne, MD; one son, JaRell Taylor of Princess Anne, MD; best friend and mother of his children, Alison Jones of Princess Anne, MD; best friend/brother, Devin (Lyndsay) Jackson of Delmar, DE; special sister, Tara Campbell of Salisbury, MD and special friend, Sheena Armstrong of Bloxom, VA. Mal also leave precious memories with a host of nieces, nephews, aunts, uncles, cousins, and friends. In addition to his father, he was preceded in death by his uncle Stanford “Bunky” Taylor. SUBMITTED WITH LOVE, THE FAMILY

Jamaal&#8217;s Life and Legacy Jamaal Frances Taylor, a resident of Crisfield, Maryland, was born on August 17, 1984. He was the son of Lily Cecelia Taylor and the late Leroy Sidney Taylor, Sr. He unexpectedly departed his earthly life at... View Obituary & Service Information

The family of Jamaal Frances Taylor created this Life Tributes page to make it easy to share your memories.

Send flowers to the Taylor family.