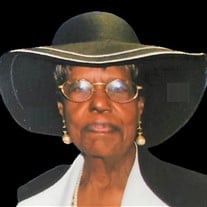 The Life and Legacy Of Iris Iris Willamae Warren, beloved daughter and second child of the late Ira Samuel Wright and Lillian Hull Wright, was born on March 13, 1933 and raised in Wetipquin, MD. She transitioned from earth to glory on Monday, October 4, 2021. After receiving her formal education in the public schools of Wicomico County, MD and attending Salisbury High School, her love for learning and a strong commitment to helping others led her into the medical field. Iris studied and became a Registered Nurse through Hampton Institute of Nursing and attended the Universities of Maryland, College Park and Baltimore Campus. She also completed her Bachelor of Arts degree in Healthcare Administration from Antioch University. Holding multiple positions throughout her stellar career ranging from Staff Nurse to Supervisor of Nursing to Neurosurgery, Iris trained and educated nurses as well. In 1972, she was employed as the Assistant Director of Nursing at Deers Head Center in Salisbury, MD. After leaving the Eastern Shore, her career path and aspirations continued to soar and from 1978 to 1988, Iris held Director of Nursing positions at Fair View Medical Center in Montgomery, AL, Whittaker Memorial Hospital in Newport News, VA, Central Medical Center in St. Louis, MO and Vice President for Patient Care at L. Richardson Memorial Hospital in Greensboro, NC. Her strong work ethic, management and leadership skills, care and compassion for others and her dedication and commitment to excellence enabled her to be an essential advocate for nursing professionals everywhere. Iris eventually returned to the Eastern Shore of MD and became Supervisor of Nurses and Staff Nurse at Eastern Correctional Institute (ECI) in Westover, MD. She also worked for Holly Center in Salisbury, MD as Registered Nurse Manager and Acting Director of Nursing for eighteen (18) years until her retirement. Iris enjoyed traveling, spending time with family and friends, dining out, gardening, listening to music, cooking and shopping. As a member of Friendship United Methodist Church in Wetipquin, she prepared and distributed meals in the community. She was very active in the local NAACP and served on numerous professional and advisory boards from which she received accolades and awards for her outstanding contributions. Those included, but were not limited to, the American Nurses Association, American Heart Association professional education committee, Task Force for Detecting Cancer in Minorities, Sickle Cell Foundation and the list continues. The impact of her involvement is a true testament to the way she lived her life. Precious memories of her life and legacy will be cherished by: her two sons, William Travis Warren (Juanita) of Mardela Springs, MD and Theodore Travis Warren (Michele) of Salisbury, MD; her sister, MonaJoy Hill of Glen Arden, MD; grandchildren, Tycolia (Norris) Robinson of Bear, DE, Jason Warren of Las Vegas, NV, Samuel Warren of Westover, MD, Alexis Warren and Vincent Warren, both of Philadelphia, PA, Sarah Warren of Mardela Springs, MD and Taylor Warren of Salisbury, MD; nine (9) great-grandchildren; god son, Dr. Craig Harvey of Watchung, NJ; extended families, the Kiruthi family of Rockville, MD and the Hamelin family of Quebec, CA and a host of nieces, nephews, cousins, other relatives and friends. She was preceded in death by two brothers, Sinclair Wright and Frank Wright, Waithira Kiruthi, who was like a daughter to her, and a grandson, Steven Warren. LOVINGLY SUBMITTED ~ THE FAMILY

The Life and Legacy Of Iris Iris Willamae Warren, beloved daughter and second child of the late Ira Samuel Wright and Lillian Hull Wright, was born on March 13, 1933 and raised in Wetipquin, MD. She transitioned from earth to glory on Monday,... View Obituary & Service Information

The family of Iris Willamae Warren created this Life Tributes page to make it easy to share your memories.

The Life and Legacy Of Iris

Send flowers to the Warren family.