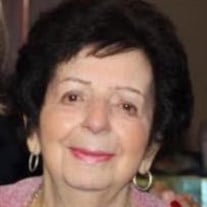 H. Jean Wehberg, 84, of Baltimore, Maryland (nee Glorioso), born to Antonino and Providenza Hilda Glorioso in 1938 passed away on Monday February 21, 2022, surrounded by family in Bridgeville, Delaware. Most recently she was staying with her daughter Barbara near the Delaware Shore. She was preceded in death by her husband, Walter E. Wehberg; her parents; her five siblings and her grandson, Scott Hafner. She is survived by her three daughters, Vicki Shawe (Palmview, Texas) Karen Principio (Bridgeville, Delaware) and Barbara Weisman (Selbyville, Delaware) as well as her grandchildren, Chris Hafner and Ryan Weisman, great grandchildren and numerous cousins. Jean originally grew up in Morrell Park, Baltimore City, living above the family’s restaurant at the corner of Washington Boulevard and Whistler Avenue (called Tony’s). When her father passed in 1964 the restaurant closed. In the meantime, her parents, her mother’s older sister Rosaria with husband Salvatore Marino and her maternal grandparents Giuseppe and Maria Grazia Battaglia purchased a large tract of land in Baltimore County in 1924. Her parents’ house was built on this property in 1941. The family originally immigrated from Cefalu, Sicily, Italy. Her residence was built in 1966 where the original family farmhouse stood. She is a 1956 graduate of Catonsville High School and went on to become a hairdresser. Later in life she worked at Pantry Pride in Lakeland, MD as a cashier; when they closed she found work at Giant Food in Catonsville, MD as a pharmacy clerk. During her early adult years, she was an avid bowler. She happily retired in 2003. Jean loved to read, travel, bake beautiful and elaborate cakes and enjoyed screen painting. She learned to cook from her mother and was an absolute genius in the kitchen and kept up the family tradition of Sunday family dinners. She was well-known for her Italian biscotti cookies, especially her Cucidata (fig cookies). A celebration of Jean’s life will be held on June 5 outdoors at 2502 Gehb Avenue, Halethorpe, MD from 2 until 6 and urn internment will be June 6 at 1:00 pm at New Cathedral Cemetery, 4300 Old Frederick Road, Baltimore, MD 21229. In lieu of flowers, donations can be made to either the American Lung Association (www.lung.org) or the American Heart Association (www.heart.org) ~ I Love You More!

H. Jean Wehberg, 84, of Baltimore, Maryland (nee Glorioso), born to Antonino and Providenza Hilda Glorioso in 1938 passed away on Monday February 21, 2022, surrounded by family in Bridgeville, Delaware. Most recently she was staying with her... View Obituary & Service Information

The family of Hilda Jean Wehberg created this Life Tributes page to make it easy to share your memories.

Send flowers to the Wehberg family.