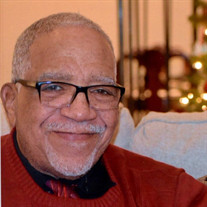 Herbert Marion Sudler, Jr. was born on March 12, 1937, in Kenton, Delaware to the late Herbert Marion Sudler, Sr. and the late Grace Claire White-Sudler. He was the third of fifteen children and eldest son. He departed this life after a lengthy illness at home with his dear wife, Geneva, near him. As a young boy Herbert had an ambitious spirit to grow beyond his humble beginnings. He completed high school through the ninth grade and began working on a farm becoming the farm manager in his early twenties. By the age of 25, he had amassed the resources and equipment needed to start his own construction business as a brick mason. This endeavor launched a career and businesses that spanned nearly 50 years until his retirement in 2010 due to health reasons. Throughout his work life, Herbert was the proprietor of Sudler Brothers, Sudler Construction, H & A Construction, and Sudler Enterprises. His firms are credited with erecting several buildings and completing masonry work on structures in Kent County: Wendy’s in Smyrna, the Hamlet Housing Community, Green Meadows Housing Community, and Betsy Ross Restaurants. Herbert was also the proprietor of My Favorite Place Restaurant in Smyrna which he operated for many years with members of his family and the Brotherly Love Club in Kenton. He also built new homes including his own home and a home for his parents. Thus, Herbert was a successful entrepreneur and created jobs for many people. Herbert was a religious man. He met his wife, Geneva Tate, in 1956 in Millington, DE when they were just teens. They were united in marriage for 64 years. Throughout the years he was a faithful member of Blanco Church, Mt. Friendship Church, and Greater Love Temple. Most recently, he was a member of Community Baptist Church in Barclay, Maryland where he also served as deacon. In his earlier years, he founded a singing group called the Holy Israelites. They sang at various churches in Maryland, Delaware, and Virginia. Herbert was passionate about going to church, and he truly loved the Lord. He wanted to pray for anyone that he met. His favorite scripture was Psalm 23. He visited people in the hospital and nursing homes and comforted and prayed for them. He was often heard saying “Thank you Jesus” and “But God.” His words were simple but true. Herbert was affectionately known as Herb, Jinx, Junior and Pop. His wife called him Herbie. He liked to eat good food and spend time with his family. He enjoyed watching westerns and savoring his wife’s cooking, especially bread pudding. He followed church with regular visits to his children’s homes and his parting words were always “Love Y’all.” Herbert also had a special bond that he cherished with his brothers and sisters. In addition to his parents, Herbert was preceded in death by his sons Ulysses “Lee” Michael Sudler and Herbert Marion Sudler, III; and siblings Evelyn Janet Howard, Donald Isaac Sudler, Sr., Carol Barksdale, Joseph Melvin Sudler, Harvey Allen Sudler, and Corrine Naomi Scott. Herbert leaves to cherish his memory his beloved wife Geneva Sudler; sons Keith Sudler (Lynette) of Hartly, DE, Stacey Sudler, Sr. (Kimberley) of Smyrna, DE, John Pride (Lorraine) of Jacksonville, FL, and Anthony Sudler of Orlando, FL; daughters Tracy Scott (Wyndham) of Dover, DE, Lisa Williams (James) of Huntingtown, MD, and Nina Winston of Atlanta, GA; sisters Vera Gautiere of Providence, RI, Phyllis Jackson of Orlando, FL, Nancy Coverdale of Dover, DE, Grace Gormley (Kevin) of Greensboro, NC, Eunice Ridgeway of Saint Augustine, FL, and Millicent Dennis of GA; brothers Howard Sudler (Mary) of Northeast, MD, Roger Sudler (Juanita) of Dover, DE, and Seymore Sudler (Shallie) of Felton, DE; sister-in-law, Bessie Diane Sudler of Clayton, DE; brothers-in-law, Frank Scott of Middletown, DE and Wilson Tate Jr. (Jackie) of Trappe, MD; daughter-in-law Judy Sudler of Middletown, DE; 25 grandchildren; 36 great-grandchildren; nine great-great grandchildren; two god-daughters Ruth Waltz and Milesa Harris; and a host of nieces, nephews, cousins, extended family, and friends. Herbert remained close to cousin Edith throughout the years. Roy Sudler was a special cousin who Herbert checked on regularly, and he also had a close relationship with the Mishoe family. Harry Reeves was a good friend, confidant, and business associate for many years. His family will remember his loving heart, family pride, easy laugh, and caring and generous spirit. Herbert touched many lives on his journey, and he will be missed.

The family of Herbert Sudler Jr. created this Life Tributes page to make it easy to share your memories.

Send flowers to the Sudler family.