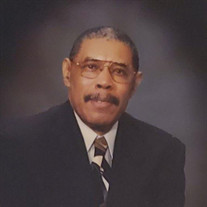 HIS LIFE AND LEGACY Henry Lee Wise, Jr. was born September 26, 1932 in Onancock, Virginia to the late Henry Lee Wise, Sr. and Cordie Wise. At an early age, he was baptized at Mount Nebo Baptist Church where he began his journey to meet the Lord. His early education took place at Mary Ann Smith High School in Accomack County, class of 1951. Shortly after graduating high school, Henry enlisted in the United States Army to explore the world. When Henry returned from the military, he began his 39-year career working with his dear friend, George Kellam, at Montgomery Ward as a warehouse supervisor where he put his love for fixing things to good use. His great grandson referred to him as the fixer whenever anything broke around the house. He was the master artist of repackaging things. He was often teased that once Henry wraps something up, you had an extremely hard time opening it again. He would just smile and say “Don’t get nervous”. Henry was known to many by several names: “Dad, Grandpa, Pop-Pop, Pepa, Hank and Uncle June.” He wore these names proudly, playing an intricate part in so many lives he touched. He had a love for his family that was unmeasurable. The love and care in raising his children and supporting his family was second to none. After retiring, he reunited with a childhood friend, Arlene E. Terrell and they were married on February 19, 1999 and shortly afterwards relocated to Salisbury, MD. They planted roots down in Salisbury, MD where they became active members at Cathedral of Deliverance Church in Fruitland, MD. They enjoyed going to church together, out to eat or just sitting at home watching one of their favorite reality shows like “Survivor.” Even in retirement, Henry continued to show the love for his family by being a role model and father figure in raising his great grandson, William Moore, who gave him the name “Pepa.” At any family gathering there was one thing that Henry looked forward to besides seeing his family and that was his “sugar shots.” He loved his sweets; it was always like looking at a kid in a candy store when it was time to cut the cakes, pies and even cookies. He loved to sit back with his newspaper on his lap, sugar shots in his hand and watching a good ole western. Henry was preceded in death by his parents, Henry and Cordie Wise, sisters, Bessie Mae Davis and Nelly V. Lomox and his first wife, Annie Wise. Henry leaves behind to celebrate his glorious life: his wife, Arlene E. Wise; his sons, Henry Wise (Barbara), Anthony Wise, Steve Wise (Marie) and Eric Wise (Angela), all of Baltimore, MD; his daughters, Teresa Craig (Jerome) of Augusta, GA and Demerious Rodwell (Tracey) of Salisbury, MD; stepchildren, Anthony Terrell (Jesca) of Silver Springs, MD, DeBorah Terrell of Willingboro, NJ and Calvin Drummond, Robin Drummond and Regina Drummond, all of Baltimore, MD; his brothers, Nathan Wise (Joanne) of Melfa, VA and Edward Wise, Ralph Wise, Claude Wise and David Wise, all of Onancock, VA; his sisters, Audrey White of New Jersey, Margaret Ann Trader of Pocomoke City, MD and Betty Ann Simson of Onancock, VA; two sisters-in-law; two brothers-in-law; grandchildren; great grandchildren and a multitude of nieces, nephews, cousins, and friends. LOVINGLY SUBMITTED ~ THE FAMILY

HIS LIFE AND LEGACY Henry Lee Wise, Jr. was born September 26, 1932 in Onancock, Virginia to the late Henry Lee Wise, Sr. and Cordie Wise. At an early age, he was baptized at Mount Nebo Baptist Church where he began his journey to meet the... View Obituary & Service Information

The family of Henry Lee Wise Jr. created this Life Tributes page to make it easy to share your memories.

HIS LIFE AND LEGACY

Send flowers to the Wise family.